The stock market crashed in October 1929, causing widespread economic chaos across the United States. To make things worst, the Dust Bowl lasted throughout most of the 1930s, greatly affecting agriculture, one of North Dakota’s largest and most important commodities. The country was in the midst of the Great Depression, and North Dakota felt its lasting effects.

Although less affected than some parts of the country, North Dakota did take a hit during the Depression. Farmers were the most affected. Many of them abandoned their farms to move into the larger cities. Bismarck’s population more than doubled from 1920 to 1940.

In 1929, the first “talkies” – motion pictures with audio – debuted at the Paramount Theater on 3rd Street near Broadway Avenue.

Across the river, the original “MaNDan” letter billboard was placed atop Crying Hill facing south. It involved 12 gallons of paint and 47 truckloads of stone, mostly broken pavement taken from the widening of 6th Avenue NW. The sign was relocated to the hill’s northeast side facing Interstate 94 in 1987, replacing the original stone with enforced concrete taken from roof beams of the former Mandan Pioneer building.

Fire consumed the State Capitol on December 28, 1930. The fire was determined to have been caused by spontaneous combustion from a collection of rags covered with turpentine and varnish that had been used earlier to prepare for the upcoming legislative assembly.

Insurance only covered $728,000 of the damages, however the loss was in millions. Most of the important state documents were also destroyed in the fire, including all but one copy of the State Constitution.

Prior to the Capitol’s destruction, the state had already been anticipating the need for a new capitol. The original Capitol Building was completed in 1884, shortly after Bismarck was named capital of Dakota Territory. The Liberty Memorial Building was built in 1924 to temporarily help alleviate overcrowding of the growing state government until funding for a new Capitol was available. Plans for a new Capitol had been put on hold due to the economic conditions at the time.

North Dakota was forced to construct a new capitol in the midst of the Great Depression, and thus chose to construct an art-deco skyscraper, which would tower the city at nineteen stories when completed in 1934.

World War Memorial Building is dedicated on January 9, 1931. The joint city-county community center was approved in 1929. The Art Deco-style building deployed the most modern construction techniques of the time. It contained the largest convention center in the state upon opening.

The state-owned streetcar line is disestablished in the aftermath of the Capitol’s destruction, on February 28th. Later that year, the first commercial airplane landed in Bismarck. Northwest Airways (later Norwest Airlines, now part of Delta) established Bismarck service. It is the longest-service airline for Bismarck, and even the sole airline provider for many years.

New Burleigh County Courthouse is dedicated at 6th and Broadway on land donated by Dr. Quain.

Montana-based Buttrey’s opens a Bismarck store at 404 E Main Avenue in 1931. The store moved to the corner of 4th Street and Broadway Avenue in 1941, where it remained until 1974 when local competitor A.W. Lucas purchased the building for expansion. Buttrey’s then relocated to 218 N 4th Street. Records indicate that Buttrey’s at one time also had a store in Mandan, as well as North Dakota stores in Minot, Grand Forks, Dickinson, and Fargo.

In the wake of the Capitol’s fire, Jamestown attempted to procure the capitol for itself, but voters overwhelmingly defeated the attempt, keeping it in Bismarck.

Ground for the new Capitol was first broken on August 13, 1932, however a second ground breaking ceremony would later take place after the original cornerstone was damaged.

Striking laborers stand before the Capitol during construction.

Construction of the new capitol was not without its problems. On May 16, 1933, construction workers went on strike for better working conditions and a pay increase to fifty cents per hour. The strike lasted for weeks, and resulted in several arrests and injuries. Governor William Langer declared martial law on June 1 to put an end to the strike.

The Capitol’s completion in 1934 would go practically unnoticed, however, as the eyes of North Dakota were instead focused on the controversial felony convictions of Governor William “Wild Bill” Langer.

Langer’s trial began on May 22, 1934 in Fargo. Twelve jurors would ultimately decide the fate of their own, highly respected governor. The trial was temporarily delayed when one of the prime witnesses, Assert Erickson, became hospitalized.

On June 16, after sixty hours of deliberation, the jurors found Langer guilty on both charges; conspiracy to extort funds from Federal employees and blocking the orderly operation of an act of congress.

Following his felony conviction, the North Dakota Supreme Court ordered that Langer be removed from office and replaced by Lieutenant Governor Ole Olson. Langer did not go without a fight, however.

When the Federal Government officially recognized Olson as North Dakota’s governor, Langer declared North Dakota’s succession from the United States. He then declared martial law and called a special legislative session, where he would appear before the Senate and proclaim “I am still your governor.” Langer also asked for the impeachment of all members of the North Dakota Supreme Court, along with Governor Olson.

Langer eventually rescinded and stepped down from his position, and Olson assumed his place. Even after his departure, however, Langer continued to live in the Governor’s Mansion throughout the remainder of his term.

Even following his felony convictions, Langer remained extremely popular. Langer’s wife, Lydia, ran for governor later that year, but lost to Thomas Moodie, who was also asked to step down from governorship after it was revealed that he did not meet the residency requirements.

After three additional trials, Langer was eventually acquitted of all charges and again elected governor, serving his second stint from 1937-1939. He then went onto represent North Dakota at the U.S. Senate until dying in office in 1959.

Voters legalized the sale and manufacture of beer in September 1933. It was the first time alcohol could legally be sold since North Dakota was admitted as a dry state in 1889, which carried over into the nationwide Prohibition beginning in 1920. 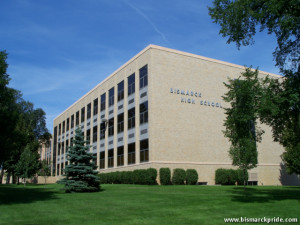 The Federal Building received a large addition on the building’s north side in 1937.

Bismarck Tribune won a Pulitzer Prize in 1938 for a series of articles entitled “Self-Help in the Dustbowl.”

1939 saw the opening of Bismarck’s second chain grocer, Piggly Wiggly, which was established by W.W. Oliver. Piggly Wiggly went onto be purchased by Roy Rockstad and Eugene Leary ten years later, which became the precursor to Dan’s Supermarket.

1939 also saw the implementation of speed limits for the first time in Bismarck and the installation of Bismarck’s first traffic light, at the corner of 9th Street & Main Avenue. The 9th Street Underpass was completed the following year.

In 1940, an underpass was completed at 9th Street and Northern Pacific Railroad. F.W. Woolworth relocated on September 13th into the former City National Bank building at Main and 4th. U.S. Weather Bureau departs Camp Hancock, where it had been housed since 1894. The camp was among Bismarck’s earliest establishments, in 1872, as an infantry post and supply depot.

In 1941, Morton County Courthouse in Mandan is destroyed by fire. The 56-year-old brick building was built in 1885. Initial damage estimates were $50,000. Few loose items were saved, but most of the official records housed in a fireproof safe were salvaged.

Logan’s Grocery closes after sixty-four years. Austin Logan established Logan’s Grocery in 1877. With only $200 in his pocket, Logan had arrived in Bismarck from Connecticut a year earlier, at the age of 21. Logan built a new store on the same site in 1881. Logan’s son, Roy, bought the business from his father in 1915 and constructed the present-day Logan Building in 1917, where it remained until closing in 1941. 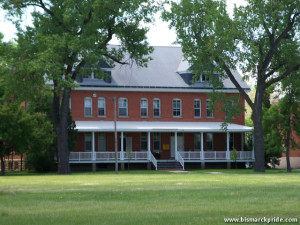 Bismarck became an integral part of World War II when, in 1941, Fort Lincoln, located just south of Bismarck – not be confused with Fort Abraham Lincoln south of Mandan, was designated an internment camp to house German and Japanese civilians and POWs. It became the largest of such camps in the United States during the war, housing more than 4,030 people by the time the last prisoner departed in March 1946.

The first detainees at Fort Lincoln arrived on June 2 and, for the most part, those detained at Fort Lincoln were able to maintain an ordinary life. The detainees established their own city within the camp, complete with a cafe, barber shop, doctor’s office, and even a casino.

Local businessman, Harold Schafer, founded Gold Seal Products in 1942. Gold Seal eventually would become one of the largest privately-owned institutions to ever exist in North Dakota, with sales topping $50 million before its sale to Airwick Industries in 1986.