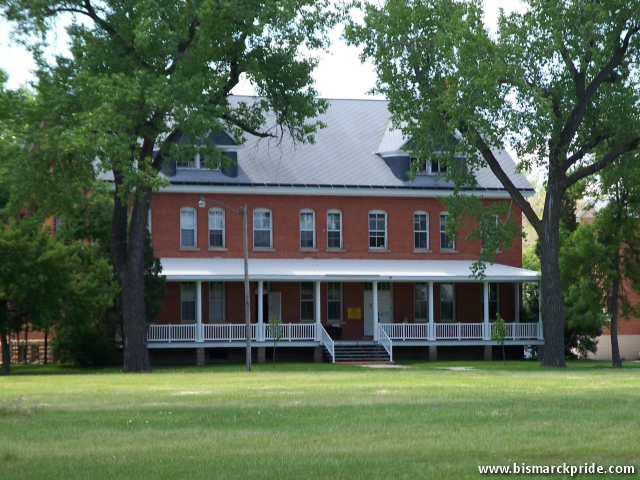 Fort Lincoln was a military post that was utilized as a concentration camp to house German and Japanese civilians and POWs during World War II, the largest of such camps in the United States. Today, the site is home to United Tribes Technical College, with many of the 1903-built brick buildings still in use.

It is located immediately southwest of the Bismarck Airport.

Fort Lincoln was established in 1895 as a military base to replace the former Fort Abraham Lincoln, which was located south of Mandan (well known as the post commanded by General Custer). The brick buildings that remain at the site were constructed in 1903.

The fort was abandoned in 1913, only to reopen again during the 1930s as the state headquarters for the Civilian Conservation Corps, who constructed many prefabricated wooden buildings on the site.

The internment camp was established in April 1941, with the first prisoners arriving on June 2. The German prisoners called the camp “Friedrichsruh” after the home of the German Chancellor Otto Von Bismarck. Fort Lincoln was used as an internment camp until March 1946, after more than 3,850 detainees had been committed.

For the most part, those detained at Fort Lincoln were able to maintain an ordinary life. The detainees established their own city within the camp, complete with a cafe, barber shop, doctor’s office, and even a casino.

Each person housed at the camp was allowed one cup of coffee and 5.125 pounds of food per day. A newspaper article from September 1941 listed a hearty menu for the day, consisting of fried eggs with bacon and cooked oatmeal for breakfast; pea soup, sauerkraut with potatoes and pork, and apricot dessert for lunch; and meat loaf with creamy mashed potatoes and tea for dinner.

There was only one recorded escape attempt at Fort Lincoln, made by German seaman John Marquenie in 1941. Marquenie tunneled himself beneath the 10-foot high security fence, evading authorities for three days before being recaptured. He was charged with grand larceny for the theft of a rowboat used in his escape.

Following World War II, the Army Corps of Engineers used Fort Lincoln as the headquarters for the Garrison Dam Project until its completion in 1954.

In 1966, the government declared it surplus, and in 1969, it became United Tribes Technical College, which remains today.

Note: Some sources state as many as 4,030 detainees were held at the camp, but most sources list the 3,850 figure. It is possible the higher number includes Italian soldiers impounded in a nearby camp in Montana, who were originally slated to be held at Fort Lincoln.