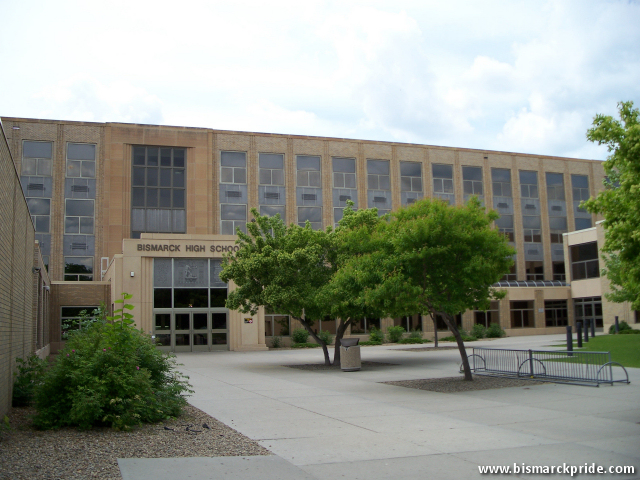 Bismarck High School (BHS) is a public secondary school serving grades 9-12. The current building opened in 1935 and is the school district’s oldest surviving school house. The school houses about 1,500 students each year.

Bismarck High was the city’s only public high school until the completion of Century High School in 1975. Its school colors are maroon and white, and its Demon mascot has been used since 1922.

From its inception in 1939 until 1955, Bismarck Junior College (now Bismarck State College) was housed on the third floor of the current high school building. 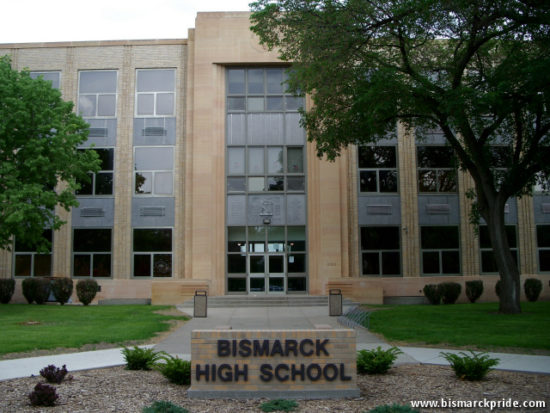 Current main entrance, an original section of the 1934 building.

Although Bismarck organized a public school district in 1873, its first graduating class, consisting of two students (Emelia Handson and Jennette Ward), wasn’t until 1887. From 1884-1912, the high school was housed inside the 1884-built North Ward School, along with all other grade levels. William Moore reorganized the program from two-years into four in 1897.

The first designated high school building was built in 1912. It stood immediately southwest of the current building and continued to house the junior high until 1962.

Construction of the current building commenced in 1934 and was completed for the 1935-1936 school year at an initial cost of $404,000. The school board had considered three different sites before choosing to build the new high school immediately adjacent of the 1912 structure. 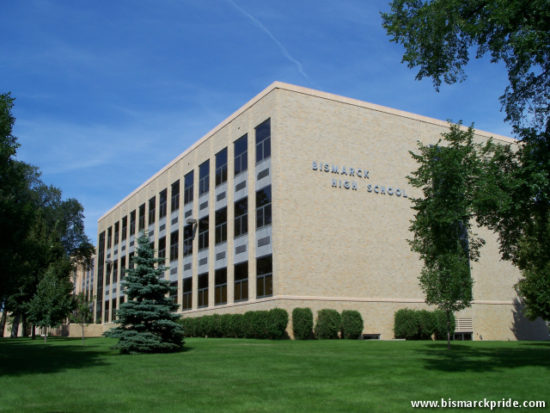 The current building has seen several major alterations over the decades, but the original marble and brass still adorn the main lobby and staircase, as well as some of the original lighting fixtures.

The building’s first significant – and by some accounts its largest – expansion was completed in 1963, after voters approved a $1,850,000 bond measure that also funded constructing a second junior high (today known as Simle Middle School) to compliment Hughes Junior High. It also provided funding to demolish the 1912-built former high school. In addition to a new classroom wing to its south, the project added an additional physical education classroom, music room, and an expanded gymnasium to the northeast.

The building completed another significant expansion and renovation in 1987, adding a commons area, which doubles as a cafeteria, to the east and relocating the library to the 2nd floor, as well as heating, electrical, and plumbing upgrades. The project cost $5.9 million, with $4.3 million funded through a voter-approved bond.

It was a much smaller renovation project than was initially proposed, after voters overwhelmingly rejected a $16.4 million bond measure on June 4, 1984. The larger proposed “modernization” contained three phases that also included a new gymnasium, swimming pool, and additional parking.

In anticipation of the full expansion, the District previously purchased 33 properties in a two-block area for $2 million to be demolished – many of which were already condemned, with plans to engulf portions of 8th Street and Avenue D.

A smaller $9.8 million bond measure, $5.3 million of which dedicated for Bismarck High, was defeated by 163 votes on April 30, 1985 before a revised proposal, shifting $1 million from Bismarck High towards other projects, was narrowly approved in November of that year.

The next major expansion and renovation commenced in 1996, essentially gutting the interior while adding the Swanson Wing to the north, named for Em & Ardys Swanson, both former long-time teachers and one a former principal. The new wing houses two gymnasiums, a fine arts center, music rooms, and social studies rooms.

Its most recent remodel and addition commenced in 2018, as part of a voter-approved $57.5 million bond measure for improvements of both Bismarck and Century High Schools, as well as the three public middle schools. The Bismarck High component cost $17 million, adding a 25,600-square-foot auditorium, an 8,700-square-foot third court to the main (Karlgaard) gymnasium, and 10,000 square feet dedicated to fitness, a weight room, and wrestling. Prior to this, Bismarck High was the state’s only Class A high school without a dedicated auditorium – instead utilizing the Knaack Center (also a gymnasium) for such functions.