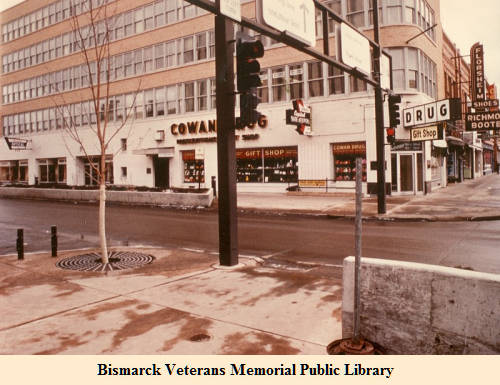 The Cowan Building is a historic five-story building block located on the southeast corner of Broadway Avenue and 4th Street, officially at 123 N 4th. It is named for Cowan Drug, who was a long-time tenant and owner of the building. It was originally known as the Kupitz Block, named for its original owner and occupant – a grocery store.

The core of the Cowan Building was constructed in the aftermath of the 1898 Fire, which consumed the former Kupitz store. The original brick building was only two stories tall when it officially opened to public on November 17th, 1898. The Kupitz store occupied both floors and was partially lit by a skylight. It was hailed as the most handsomest and most extensive grocery store west of Saint Paul.

J.G. Cowan originated Cowan Drug in 1907 when he acquired the B.E. Jones’ Drug Store, where he was employed as a pharmacist. It was then located at 414 Main Avenue. A second store later opened at 206 N 4th before they were consolidated in 1916 into the Kupitz Building, which became the Cowan building when the Cowans purchased it in 1921.

The building was later expanded to reach the alley, where Black Hills Stage Line was housed for some time.

From Two Stories to Five

In 1955, the Cowan Building added three additional stories to its original two as part of a $250,000 renovation project. The expansion was considered so risky that only one insurance company – Lloyd’s of London – was willing to insure the contractor. Even then, it was at sucha high premium that they proceeded without insurance and, fortunately, finished without issue.

It was this remodel that turned the Cowan Building into its present appearance, cladding the original brick work with paneling, rounding the canted Broadway-facing corner, and adding the continuous window bands.

Cowan Drug temporarily vacated its namesake building in 1969 when it relocated to 411 N 4th Street, which was previously home to Red Owl. But, it reoccupied the Cowan Building in 1972.

Cowan Drug closed in 1994 and the Cowan family sold their namesake building to the Boutrous Group that same year.

In 2012, new owner Loran Galpin announced a major renovation of the Cowan Building. Among other improvements, the entire building was gutted, all windows were replaced (reportedly more than 287 of them), and the elevator replaced. It also filled in an underground vault that extended below the public sidewalk. The vault, which previously housed businesses and storage, measured 12 feet high and the entire length of the building.

Bridal-N-Moore occupied the former drug store’s space within the Cowan Building from November 1994 until the late 2000s. Since 2017, it has been home to The Rejuvenation Place.