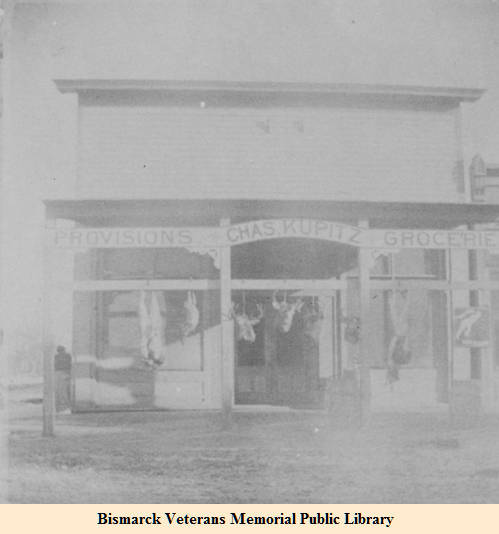 Charles Kupitz (~1845-1929) was a pioneering local businessman who came to Bismarck with the 7th Calvary in 1873, stationed at Fort Abraham Lincoln. After his enlistment, he saw great success through his stage coach line and grocery store. His most enduring legacy was constructing today’s Cowan Building in 1898, which was originally known as the Kupitz Building.

Kupitz was born in either 1844 or 1845 in Prussia, Germany. He moved to England at age 17 and served two years as an assistant steward aboard a ship. Then, at age 19, he immigrated to America, settling in New York, where he worked at a hotel. He enlisted in the Army in about 1869, where he was assigned to the 7th Calvary in the Kansas-Nebraska territory. He served under General Custer, apparently with strong opposition to Custer’s brutality against the Indians.

Kupitz relocated with the 7th Calvary to Fort Abraham Lincoln in 1873 and completed his five-year enlistment the following year.

He then engaged in farming for some time before taking up staging in the late 1870s. At one time, he ran three stage lines, to Fort Rice and Fort Yates, with twenty-three horses. During this time, he held the government mail contracts. When he lost the mail contracts due to underbidding, he commenced freighting to the Black Hills, but found inhibited success.

Upon returning to Bismarck, he established a meat and grocery store on Main Avenue between Fourth and Fifth Streets. After the store was destroyed by fire, he partnered with Tim Griffin to open a similar store at the corner of 4th Street and Main Avenue, but became dissatisfied with the partnership and sold his interest to Griffin.

In spring 1881, Kupitz rented an old shack on the southeast corner of 4th Street and Broadway Avenue to re-establish a grocery and meat store. That operation proved prosperous and, within a few years, Kupitz purchased the lot and constructed a new frame building.

That building was one of the many destroyed by the 1898 Fire, after which the store was temporarily housed within the Raymond Block, and the former Bain store on Main Avenue, until returning to its previous location inside his newly constructed two-story brick building at 123 N 4th Street, today’s Cowan Building, on November 17th, 1898.

The Kupitz store occupied both floors of its namesake building and was partially lit by a skylight. It was hailed as the most handsomest and most extensive grocery store west of Saint Paul.

Kupitz retired in 1915, selling his grocery store to A.W. Lucas Company, who continued operating the Kuptiz grocery store from the Lucas storefront directly across the street until closing it in 1921.