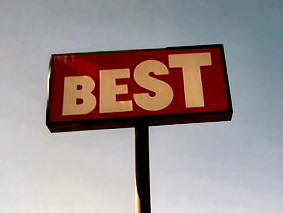 Best Products, popularly known as “BEST,” is a defunct national discount catalog retailer who maintained a Bismarck showroom from 1979-1997, originating as LaBelle’s.

As of 1996, the company operated 169 showrooms and 3 distribution centers across 23 states, in addition to its catalog division. The company folded in 1997. 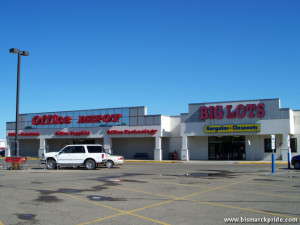 The showroom itself accounted for roughly 1/3 of the 65,000-square-foot building. The remainder was warehouse space. At Christmas, a large portion of its warehouse was converted into a large toy department. Space was also set aside for a restaurant; however, none apparently ever opened.

Richmond, Virgina-based Best Products purchased Labelle’s and its parent company in 1982. The local showroom was re-branded as “BEST” in July 1987, at which time the store underwent minor renovation.

The Bismarck store closed in 1996 as part of the company’s bankruptcy reorganization efforts. Those efforts proved unsuccessful and the company folded entirely in 1997.

Best Products was founded in 1957 and headquartered in Richmond, Virginia. At its height, BEST was one of the nation’s largest retailers, with locations in 23 states. However, much like fellow catalog retailer Montgomery Wards, BEST was unable to adapt to changing consumer trends, forcing its eventual closure.

The company filed for bankruptcy protection twice, once in 1991 and again in 1996. In the months following its second bankruptcy, the company shuttered 81 of its 169 showrooms and 3 of its 4 distribution centers. At the time, North Dakota had two, in Bismarck and Grand Forks, both on the closing list. Fargo’s closed the year prior.

BEST – and its Labelle’s predecessor – operated as a traditional catalog mail-order retailer before expanding its business model to include retail showrooms that blended a self-service department store format with warehouse-style ordering.

Its self-service departments included toys, health and beauty, and sports. Most big-ticket items, such as electronics and furniture, were purchased through an order request, at which point the product was either retrieved onsite by store personnel from the warehouse or shipped through its catalog.

Each Christmas, a large portion of its warehouse was converted into a toy superstore.

The company was known for its expensive, unconventional store designs through a partnership with the Sculpture in the Environment architecture firm. This trend excluded the Bismarck location, which portrayed a typical retail store appearance.