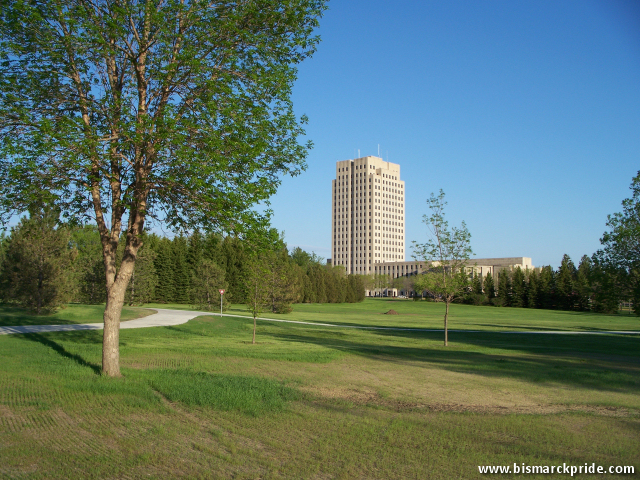 The Capitol Grounds feature walking paths, two parks, various species of trees, a veterans memorial, and various statues that includes one of Sakakawea.

The capitol grounds were used twice to break the world record for the most snow angels, most recently in 2007 with 8,962 people participating.

Situated on the grounds are several State Government facilities, in addition to the State Capitol.

Buildings Located on Capitol Grounds (in order of completion):

State Capitol (Original) – Constructed in 1884 when Bismarck was named capital of Dakota Territory, the original capitol went onto serve as capitol of North Dakota until it was destroyed by fire in 1930.

State Office Building – Constructed in 1955 to house Bismarck Junior College, the overflowing state government took control of the building in 1961, and has used it ever since.

Governor’s Mansion (Current) – Completed in 2018 to replace the 1960-built residence.

It has been unconfirmed when the cabin was removed, but it remained as late as 1956.

NOTE: The Former Governor’s Mansion, constructed in 1884, is not listed due to the fact it is technically not housed on the grounds of the State Capitol.