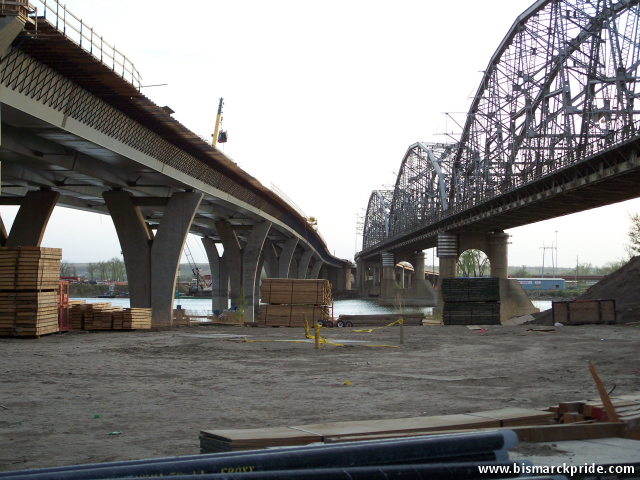 U.S. Highway 10 was the primary highway through North Dakota until the completion of Interstate 94 in 1965. The highway included the Liberty Memorial Bridge, which was the region’s only vehicular bridge to cross the Missouri River between 1922-1965. Most of the former Highway 10 is now part of Interstate 94, with one noted exception being through Bismarck-Mandan, where the Interstate skirts north of the former highway just east of McKenzie.

Locally, U.S. Highway 10 was also known as “Memorial Highway” (an homage to the Liberty Memorial Bridge) and portions of the former road are still known by this name (as well as “Old Highway 10”), although the modern Bismarck stretch has seen significant route alterations. The highway spanned Bismarck’s Main Avenue before entering Mandan’s Strip, piercing the downtowns of both core cities.

North Dakota’s stretch of U.S. Highway 10 commenced construction in 1927 and was largely completed the following year. Originally, most of the highway was a gravel road. The stretch between Fargo and Mapleton was first to be paved, commencing in 1931.

As the primary highway through Bismarck-Mandan for over forty years, running parallel to the railroad, the road cemented the region’s commercial center as vehicular locomotion grew. Travel-reliant businesses particularly thrived along the highway, including numerous hotels, gas stations, and restaurants. Consequently, those same businesses ultimately folded when Interstate 94 replaced Highway 10 as the primary highway.

Bismarck’s nationally renowned Holiday Inn opened along Highway 10 immediately southeast of the Liberty Memorial Bridge in 1962. At the time of opening, it was arguably the best positioned hotel in the region.