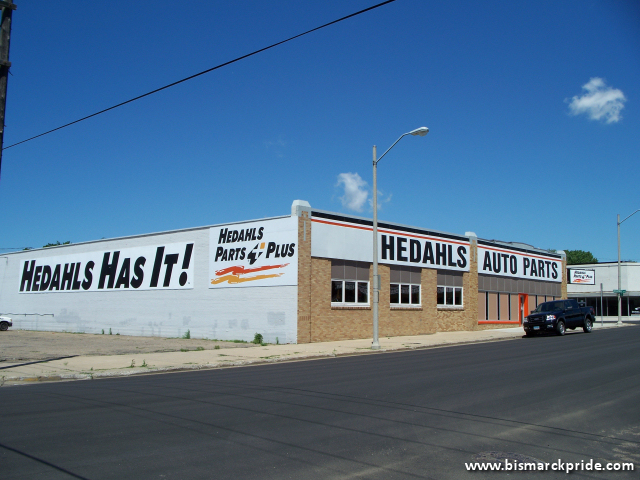 Hedahls is a regional auto parts dealership headquartered in Bismarck. Ed Hedahl opened a Ford dealership in Mercer, North Dakota, and later a Ford-Durant dealership in Bismarck. When Durant went out of business, Hedahl had a large stock of spare parts and used cars still in inventory, and was forced to liquidate the inventory. By the late 1930s, however, his used parts business became quite successful.

Ed died in 1942, and his daughter, Beaulah, took over the reigns of the company until the end of World War II, when her brother Erling and Neil took over.

In 1950, Hedahls opened its first branch store in Linton, North Dakota. Throughout the 1950s, the company expanded to also include service of televisions, boats, and other electronics. It was also at this time that the company joined together with other regional companies to form the Automotive Northern Warehouse.

In 1960, the company once again began to solely focus on automotive parts and repair, and the company also opened its second branch location in Hettinger. A machine shop was also added to the Bismarck store. In 1967, Hedahls purchased its chief competitor, QB&R, which was the oldest automotive supply firm in North Dakota.

Throughout the 1970s, Hedahls created the NEMAC Warehouse, BENCO Equipment, Main Street Tire Company, and added addition Hedahls Auto Parts locations. Erling retired in 1979, but remained on the Board of Directors until 1993.

In 1984, the company acquired stores in Fergus Falls and Detroit Lakes, both in Minnesota. Neil Hedahl passed away in 1986, and his son, Dick, was named President.

Today, Hedals has 23 locations. The Bismarck location is still housed in the original structure that formerly housed the company’s Ford-Durant dealership.