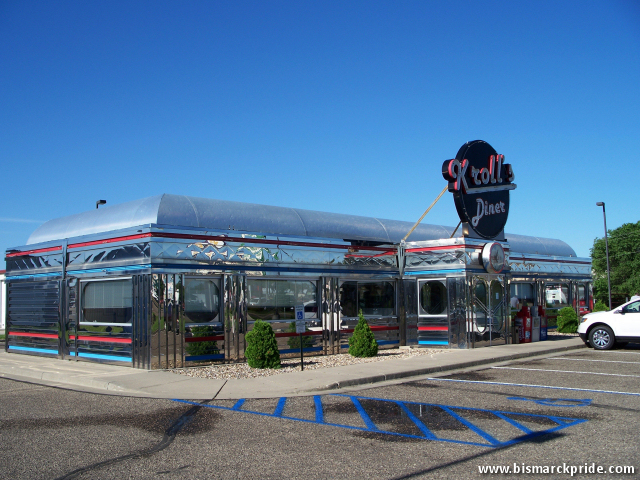 Kroll’s Diner on The Strip

Kroll’s Diner is a long-time local restaurant with three locations in Bismarck-Mandan, in addition to restaurants in Fargo and Minot.

Featuring a wide variety of menu offerings, including breakfast and burgers, Kroll’s Diner is perhaps most widely associated for its German entrées, including knoephla soup and fleischkuchle.

Kroll’s was established as “Kroll’s Kitchen” at 1915 E Main Avenue by Mr. and Mrs. Kenneth Kroll in June 1968. Edward Wetsch and Jim Glatt purchased the restaurant in May 1972, when the Krolls moved to Rugby. That location was remodeled and expanded in 1993.

A second location, off State Street in northern Bismarck, opened in 1994 after purchasing and converting the former Roll ‘N Pin Restaurant.

The Mandan location, which features a design and decor reminiscent of classical 1940s-era diners, was the first to carry the “Diner” name when it opened in June 1996. The Diner was built by Starlite Diners in Florida and trucked to Mandan in four sections. A similar Kroll’s Diner concept opened in Minot the following year, followed by Fargo in 1998.

Currently, there are five total Kroll’s Diner locations. At one time, there were three locations in Fargo, all but one have since closed.

Long-time owner Jim Glatt later was later an initial partner in Bismarck-Mandan Hardee’s restaurants, before selling to a Minneapolis firm in 1979. That same year, Glatt purchased Little Cottage Cafe. He also purchased the existing Wendy’s franchises in Minot and Bismarck in 1992. At some point, Glatt also obtains ownership in Kirkwood Bank & Trust.

Kroll’s is well known for its marketing that heavily focuses on overly stereotypical German women cooks, commonly referred to as the “Kroll’s Girls,” who spout out the restaurant’s slogan “Sit Down and Eat.”

In 2010, Kroll’s was recognized on Food Network Magazine’s Best Breakfast List. In 2014, Kroll’s again received recognition, this time as the best diner in North Dakota, according to Yelp.