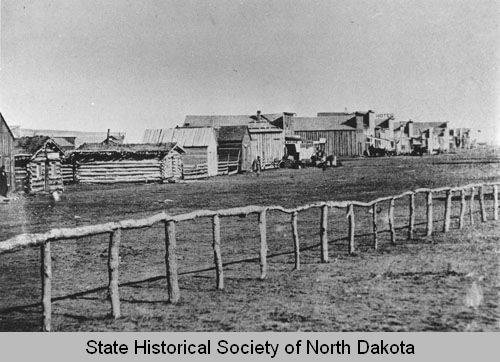 In the year following its founding, 1873 marked several key developments for the fledgling town… the first steps towards a significant city. Despite promising expectations, a looming national financial crisis would impede progress for nearly a decade.

Initial growth was rapid. By spring, some sixty-to-seventy buildings had been erected, many of them saloons and others of “ill-fame.” Nearly all of the structures were log buildings and tents that were quick to assemble and could be easily relocated. This was essential given the ongoing townsite contest. The number of buildings grew to 147 by May.

One correspondent’s telling in a May 21, 1873 Minneapolis Tribune article states that the town boasted a brewery, pop factory, three billiard halls, three restaurants, four hotels, and a handful of other businesses, including a grocer and drug store. The Shaw & Co. store, operating from a 100×25-foot tent along the riverfront, was reported to have already sold more than $60,000 worth of merchandise (more than $1 million worth today) since its inception. The store had also diversified into banking operations, with many deposits topping a thousand dollars.

The town’s estimated population had swelled to nearly 1,000 people and was ambitiously projected to reach 5,000 by winter, according to an 1873 Minneapolis Tribune article. In reality, that population count won’t officially be achieved until the 1920 Census.

Custer and the 7th Calvary

The 7th Calvary, under command of Lieutenant Colonel George Armstrong Custer, occupied Fort Abraham Lincoln in May 1873, having marched from Yankton. The Calvary supplemented infantry personnel stationed there to assist in ensuring railroad expansion. Custer remained there until his infamous massacre three years later.

Edwinton was renamed Bismarck in May, with its name-change officially recognized on July 17th. Named after Germany’s “Iron Chancellor” Otto von Bismarck, the name change was an attempt to attract German settlers and investors.

The rail line through Bismarck was completed on June 4, 1873 with the first train arriving the following day. The line directly connected Bismarck to Lake Superior. Fare was five cents per rail mile, or $29.75 from Minneapolis-Saint Paul to Bismarck.

The First Presbyterian Church held its first service on June 15th in a large tent, and ground was broken for a permanent church on June 30th at the corner of 2nd and Thayer. When completed later that year, the building also houses the first public school. Linda Slaughter, who first established the Presbyterian Sunday school at Camp Hancock, served as principal and shared teaching duties with her sister, Aidee Warfel.

Burleigh County was organized on July 9, 1873. James Emmons, William Mercer, and John Dunn, all of whom later have North Dakota counties named for them, were its first county commissioners. Among their first acts were naming Bismarck as county seat, establishing a $25 liquor license, and appointing Linda Slaughter as school superintendent.

The Bismarck Tribune published its first edition on July 11, 1873.

One month later, in August, J.E. Turner, a Civil Engineer working for Northern Pacific, supervised platting the town; assisted by George Sweet and John Bowen. It was then that Northern Pacific’s Land Commission first made lots in Bismarck available to purchase: Four quarter sections of Section 5 “on one of the railroad sections adjoining the present townsite.” Sweet and Bowen, who have streets named in their honor, were in charge of selling the lots.

“Little Casino,” whose aliases also included Ida Lewis and Elizabeth McClelland, arrived at about this time from Brainerd, Minnesota and established a successful “resort” – or brothel – at 701 Front Avenue, what was then outside of city limits. She would open a new “house” in 1877. She was arrested in Chicago in 1886 for attempting to abduct two local “working girls.” She remained operating until 1893 when foreclosure forced her out of business. She spent her last years on a farm south of Wilton, where she also operated the Casino coal mine.

The Panic of 1873 – an international financial crisis and depression – soured Bismarck’s promising future, hastened by the bankruptcy of financier Jay Cooke & Company on September 18th of that year and Northern Pacific’s own bankruptcy in 1875. 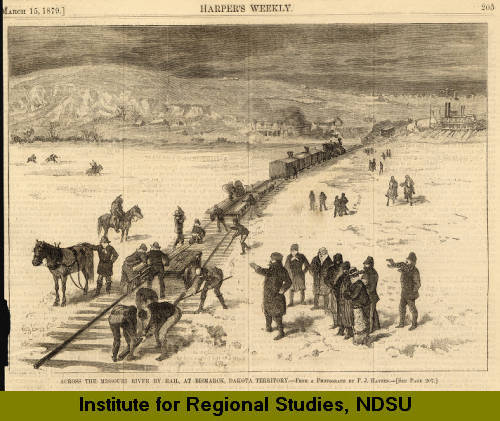 This illustration from Harper’s Weekly on March 15, 1879 depicts the railroad’s crossing of the Missouri River on ice.
Credit: Institute for Regional Studies, NDSU, Fargo (Folio 102.TrR34.1a)

Railroad construction halted for the next six years. As a result, the line virtually ended at Bismarck for almost a decade. While 555 miles of the line was completed, a gap existed westward and no bridge yet traversed the mighty Missouri River.

It wasn’t until the winter of 1879 that a so-called “bridge of ice” was built with tracks laid directly across the frozen river. During the warmer months, trains were ferried across. Regardless, rail travel was greatly restricted. 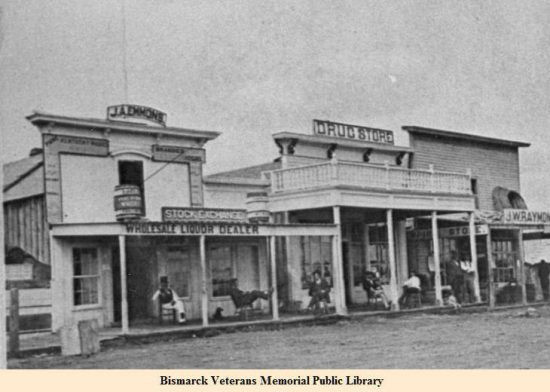 Despite its turbulent beginning, 1874 proved to be an important year, cementing the city’s long-time future. That year, population swelled to an estimated 1,200-1,400 citizens. There were six hotels, eighteen saloons, eight billiard halls, one bowling alley, one drug store, two churches, three physicians, and a handful of other thriving enterprises. The W.B. Shaw store sold roughly $150,000 worth of merchandise in both 1873 and 1874, its final year in business. Burleigh County’s first District Court opened on June 18th.

Ironically, it was the railroad’s sudden end in Bismarck that propelled Bismarck’s initial boom. Bismarck still had one strong asset… the river. Steamboat traffic was heavy, sustained by the railroad’s terminus, where cargo was transferred between the trains and steamboats for further distribution.

Likewise, the discovery of gold in the nearby Black Hills in 1874 brought a flood of prospectors who arrived via the railroad to Bismarck before setting out on their journey to the nearby Black Hills. Fort Abraham Lincoln, headed by General George Armstrong Custer, supported military excursions relating to the gold discovery. The sudden gold rush lasted until approximately 1878.

Major flooding struck the infant town in the spring of 1874. Like other major floods to come, ice jams on the river were the cause. It reportedly wiped out all of Carleton City, along with much anything else south of the railroad.

Father John Baptiste Marie Genin founded Saint Mary’s Parish and dedicated its first permanent church the following year at Main Avenue and Mandan Street. It was replaced in September 1898 with the present-day church facing Broadway Avenue. In April 1877, St. Mary’s Academy and Boarding School is established and establishes its namesake cemetery – the city’s oldest, in 1878.

Alexander McKenzie, who later became one of the area’s most influential political figures, was appointed Sheriff on December 24, 1874. He replaced the previously appointed Sheriff Charlie McCarthy, who, along with Deputy Clint Miller, drowned after falling into an air hole in the river. McKenzie would then become the county’s first elected sheriff.

Bismarck was incorporated as a city on January 14, 1875. Edmund Hackett was appointed the first mayor until a formal election was held in April, when John McLean was chosen as the first elected mayor.

In 1876, the region received national attention when Bismarck Tribune reporter Mark Kellogg was first to report on the massacre at Little Big Horn, popularly known today as “Custer’s Last Stand.” Kellogg himself was killed during the battle. 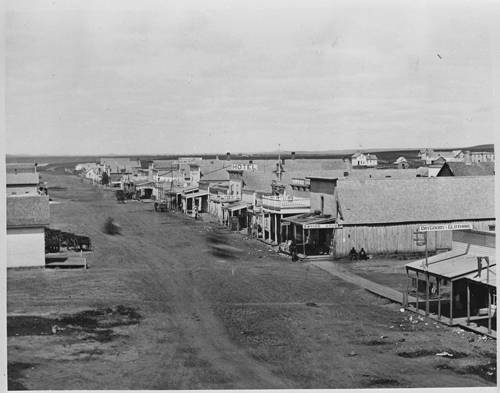 A major fire destroyed much of Bismarck’s business district in March 1877. The resulting damage was estimated at $22,000 – worth nearly half a million dollars today. It was the first significant fire for the new town, and not surpassed until the great Fire of August 1898.

The fire originated at 3:00 a.m. on March 15th inside the Arcade saloon, which had been bought out only the day prior to be converted into a tobacco store. Miners Hotel, Ostland’s Livery Stable, Joe Hare’s Billiard Hall, John Dunn’s drug store, John Yegen’s Bakery, John Boyle’s saloon, and Western Hotel. While not destroyed by the fire itself, Sloan’s Meat Market was dismantled to stay the fire. 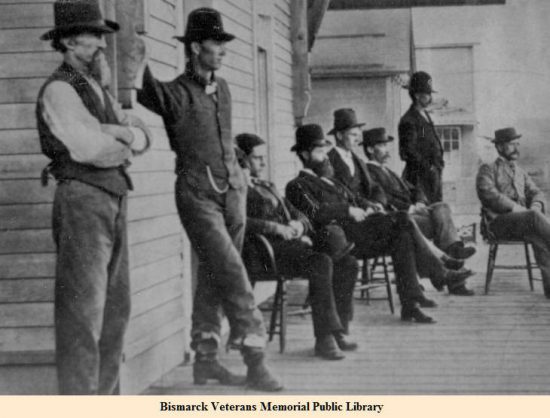 The recently ordered fire engine had not yet arrived and the town didn’t even have hocks and ladders at their disposal to fight the fire.

Within about a week, Dunn – who suffered the largest lost at $7,000 – purchased and relocated the former Congregational Church to re-open on the same site.

John Yegen was less fortunate, losing his naturalization papers in the fire.

Ironically, the Bismarck Fire Department was founded five days later, on March 20, 1877, as the Pioneer Hook and Ladder Company.

Also in 1877, George Stark, ex-president of Northern Pacific, commenced the area’s first significant agricultural operation on 100 acres of land he owned five miles southeast of Bismarck. He brought in workers from Minnesota to break the sod.

In 1877, the school was temporarily housed in a building owned by William Hallstrom on Third Street. Later that year, the Territorial House authorized a bond issue for funding a dedicated schoolhouse. Voters authorized the bond issue the following spring and a two-room brick schoolhouse was erected on the southwest corner of 5th Street and Rosser Avenue. The site later houses Will School and is the present-day home of the Provident Building.