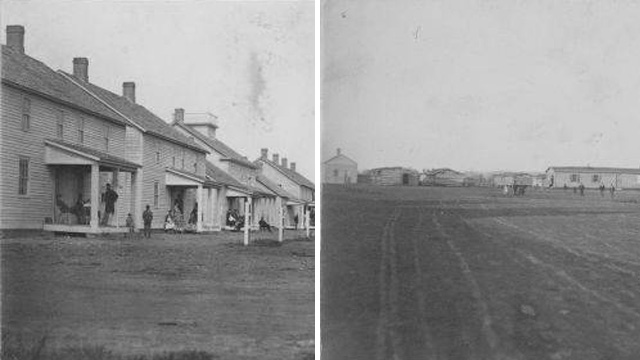 Prior to formal organization by the United States Government, the region including and surrounding what is today Bismarck-Mandan was home to several dominant native tribes, most notably the Mandan, Hidatsa, Arikara, Sioux, and Chippewa. La Vérendrye was one of the first outside explorers to the area, around 1738.

The United States acquired most of the land that comprises of present-day North Dakota in the Louisiana Purchase in 1803. Famous explorers Meriwether Lewis and William Clark camped the winter of 1804-1805 near present-day Washburn, located about 40 miles north of present-day Bismarck. During their stay in the region, Lewis and Clark were introduced to Sakakawea (also known as Sacagawea or Sacajawea, mostly to those outside of North Dakota), a Shoshone woman who acted as a translator and guide. Due to their iconic and historic relevance, the trio of Lewis, Clark, and Sakakawea are celebrated figures in the region.

The region remained sparsely settled through most of the 19th century. In addition to the native population, the sparse inhabitants of Dakota Territory largely consisted of fur traders. The first steamboats arrived in 1832, about the same time that David Mitchell established a trading fort in the immediate vicinity for the Upper Missouri Outfit division of the American Fur Company, supplementing the much more significant Fort Union located upriver near present-day Williston.

The United States formally organized Dakota Territory in 1861, originally comprising of land located in today’s North Dakota, South Dakota, Idaho, Nebraska, Montana, and Wyoming. By 1868, the government had realigned the territory’s boundaries to only include the present-day Dakotas.

The discovery of gold in present-day Montana in 1863 brought the first mass occupancy of non-native populations, with many traveling the established Missouri River steamboat lines en route. In contrast to the largely peaceful relations shared with the indigenous people up to this point, including during Lewis and Clark’s famed expedition, violent disputes became increasingly common as pioneers asserted authority over the region.

Two major skirmishes occurred during the summer of that year. The first, today known as the Battle of Apple Creek, occurred between July 30-August 1 when an expedition of roughly 2,500 men lead by General Henry Hastings Sibley, former Governor of Minnesota, engaged with Native Americans near the present-day site of the University of Mary in retaliation for conflicts in Minnesota.

Days later, only a few miles to the northwest, up to sixty people were killed during a conflict between the Dakota and prospectors carrying a reported $90,000 worth of gold. The actual number of victims varies by source, but all agree that casualties were heavy on both sides. All of the returning miners, including women and children, were killed, along with over thirty Dakota warriors. The Battle of Burnt Creek, as it is most commonly remembered, caused the area of the Missouri River near present-day Pioneer Park to “run red with blood.”

Commissioning of the Northern Pacific Railway to build the northern transcontinental rail line between Minnesota and the Pacific Northwest in 1864 ultimately established permanent settlement. To protect expanding interests, General Alfred H. Sully established Fort Rice on the west side of the Missouri River, roughly 12 miles north of present-day Cannon Ball and 30 miles southeast of present-day Bismarck. Fort Rice was named for Brigadier General James Clay Rice of Massachusetts, who was killed during the Civil War. Until its decommissioning in 1878, Fort Rice was instrumental in supporting government-sponsored expeditions and railroad development, which induced settlement and enterprising activities. It offered both defense and supplies. Isolated from civilization and subject to severe weather, early inhabitants found life difficult. 81 people died at the fort during its first year of operation.

The region’s first periodical newspaper, Frontier Scout, was first published from Fort Union on July 7, 1864. It ended publication on August 17th, but resumed on June 15, 1865 at Fort Rice.

Joseph Dietrich was the first private citizen in what is now Bismarck, having arrived in 1868.