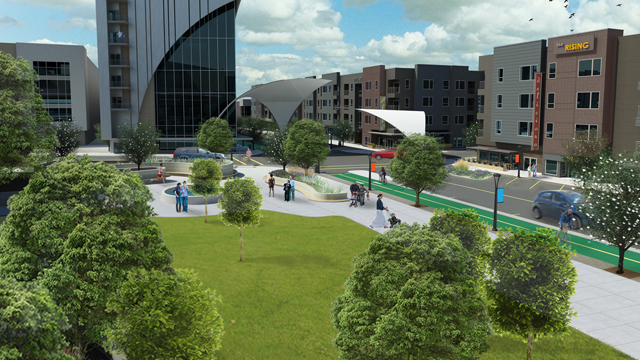 Developers of the upcoming FiveSouth project on the southern fringe of downtown Bismarck have secured a four-star national hotel chain.

The 140-room Sheraton Hotel will feature a walking bridge connecting to the newly expanded Bismarck Event Center. A CRAVE American Kitchen & Sushi Bar will also be housed inside.

According to the Bismarck Tribune, these commitments are enough to satisfy requirements to trigger a new TIF district that will divert $35 million in infrastructure upgrades and right-of-way acquisitions to support the development.

FiveSouth is an immense mixed-use project that will be developed along Fifth Street across from the Event Center. In addition to the aforementioned hotel and restaurant, FiveSouth will also feature housing, office space, and retail tenants.

Construction is expected to begin in March and will last an estimated three years prior to closing. It is likely the city’s largest single development since Pinehurst Square, in 2007.