Bismarck: The Next Chicago? 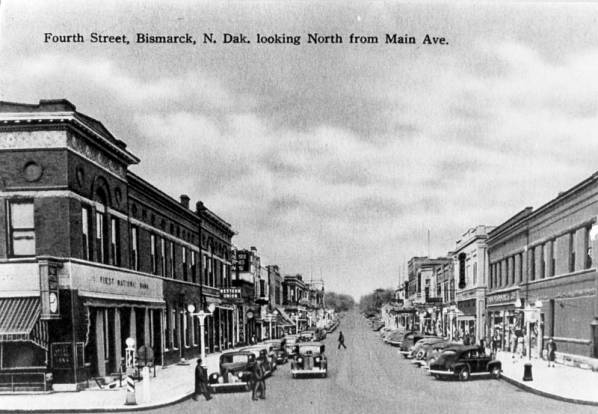 Downtown Bismarck was once a major business hub.

Bismarck, the core city of a metropolitan area consisting of over 100,000 citizens, is often mistaken in the eyes of the nation as a city behind the times, a city cutoff from the outside world with strange foreign foods like fleischkuekle and our frigid winters that often resemble the arctic tundra.

What most people don’t know is that when Bismarck was first founded, many believed it would become the “next Chicago” – a bustling metropolitan home to millions. With its central location at the crossroads of the Missouri River and Northern Pacific Railroad, it seemed destined for prosperity.

Despite that the Northern Pacific Railroad filed for bankruptcy in 1875, ending the railroad in Bismarck for nearly a decade, Bismarck’s initial growth was brisk; increasing to over 1,700 citizens by the 1880 Census – just eight years after the town of Edwinton (renamed Bismarck one year later) was established.

After surviving bankruptcy, Northern Pacific completed its multi-million dollar bridge over the Missouri River in October 1882. The completion of the bridge opened up a flow of never-ending traffic through the region.

Bismarck’s potential was evidentially realized when, in 1883, it was named capital of Dakota Territory, in a move instigated by political boss Alexander McKenzie, whose close ties with the Northern Pacific Railroad gave him unyielding control over most of the territory. Dakota Territory’s first hospital and territorial prison opened in 1885, firmly establishing Bismarck as a major center for healthcare and politics.

National companies soon began showing interest in the city, including the International Harvester Company, who opened a warehouse at the corner of 1st Street & Main Avenue in 1905 (now the Anderson Building).

The McKenzie/Patterson Hotel was known as the most luxurious hotel between Minneapolis & Seattle.

With its strong government and business ties, Bismarck would soon become home to several renowned hotels, including the Grand Pacific Hotel and McKenzie Hotel (later Patterson), whose initial 7-story structure towered over the city. The McKenzie/Patterson was known as the most luxurious hotel between Minneapolis and Seattle, with several prominent guests having stayed at the hotel, including four U.S. Presidents.

Bismarck gained a second hospital when Doctors Quain & Ramstad, who previously established a clinic in 1902, opened Bismarck Evangelical Hospital in 1909. The establishment of two hospitals further cemented Bismarck as a major healthcare center. At one time, only Rochester, Minnesota had more hospital beds per capita than did Bismarck.

The Federal Building was completed in 1913, and later expanded in 1937.

Bismarck’s role as a government center expanded when the Federal Government built a new facility housing the U.S. Post Office, Federal Courthouse, and other Federal offices in 1913. That building, located on the corner of Broadway Avenue & 3rd Street, still houses Federal offices to this day.

Bismarck became the site of the only vehicular bridge to span the Missouri River within 500 miles when the Liberty Memorial Bridge was completed in September 1922, completing the coast-to-coast link of U.S. Highway 10, which ran straight through downtown. The newly established highway through Bismarck’s core business district brought even more traffic through the city, further establishing Bismarck as a major business center.

With its continual growth and prosperity, Bismarck soon drew attention from national retailers, beginning with F.W. Woolworth around 1915. By 1930, there were several other national and regional retail chains with stores in Bismarck, including J.C. Penney, Montgomery Ward, and Red Owl, all of whom saw decades of high profitability.

As we all know today, Bismarck has certainly not become the “next Chicago”. Bismarck has never even had the distinction of ever being the largest city in North Dakota, with Fargo always leading the pack. In fact, Bismarck even trailed Grand Forks in total population until the 2000 Census.

So what happened to the vision?

By quickly establishing the young city as a major hub for government, healthcare, and business, Bismarck’s earliest settlers certainly laid the foundation to establish Bismarck as the major metropolitan area it was expected to become, destined to be home to millions of inhabitants.

Ever since the first official census was taken in Dakota Territory, in 1880, Fargo has had the distinction of being the largest city in what is now North Dakota, although Bismarck trailed by less than 1,000 citizens at the time.

The sudden termination of the railroad in Bismarck for the first decade certainly didn’t help spark the expected initial flux of migration to the region, although it did help local businesses flourish.

The establishment of University of North Dakota in 1883 and North Dakota State University in 1890 certainly gave Grand Forks and Fargo their first real accelerant ahead of Bismarck, who didn’t even see a college established until 1939.

The construction of two interstate highways bisecting in Fargo during the 1960s further accelerated that city’s growth, followed by the opening of the state’s largest shopping center, West Acres, in 1972, less than a year following the completion of Bismarck’s Kirkwood Mall.

Bismarckan’s later reluctance to change, particularly during the 1980s and 1990s, also hindered growth and expansion. Although its population continued to grow, the city itself remained mostly stagnant until the mid 2000s, while Fargo continued to rapidly expand.

Bismarck may not have become the “next Chicago”, but it has maintained its position as a major hub for government, healthcare, business, and education. Several large enterprises have, past and present, established major offices in Bismarck. Among them, Provident Life Insurance and Gold Seal were, at their height, amongst the largest privately-owned institutions ever based out of North Dakota. Montana-Dakota Utilities is currently the only Fortune 500 Company headquartered in North Dakota, with its corporate campus located in northwestern Bismarck.

Today, Bismarck is home to an estimated 60,000+ citizens, with a MSA well over 100,000 citizens. The city houses large offices for the city, county, state, and federal levels of government. Bismarck is also home to three major colleges, in addition to several trade schools.

Bismarck currently sustains some of the largest medical facilities between Minneapolis and Seattle from its two major medical centers, both of which have Level II Trauma designations.

If shopping is your thing, you’ll surely find it at one of the three major shopping centers or the numerous other retail stores located in the city, from national “big box” chains to locally owned.

Opened in 2006, Pinehurst Square was Bismarck's largest single development since Kirkwood Mall in 1970-71.

In recent years, Bismarck has seen a boom in both population growth and city development, even as the worst recession in decades swept through the nation. Who knows, in another 100 years Bismarck may be home to the millions it once was expected to be.