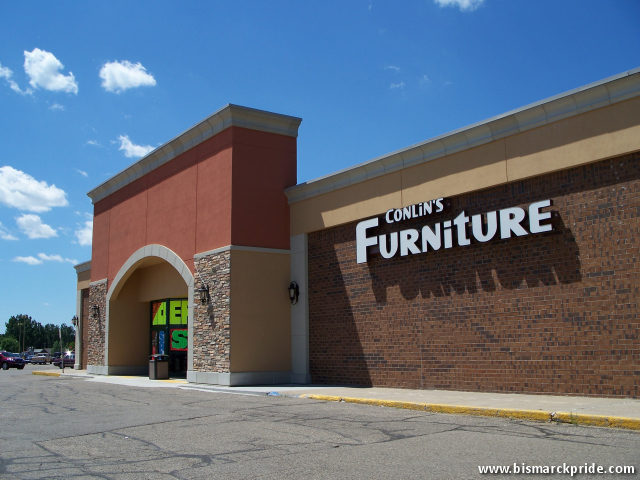 It was announced on June 26 that two stores, Conlin’s Furniture and Joy’s Hallmark, would be leaving Gateway Fashion Mall. This is just another blow to the recently renovated shopping center, which first opened in 1979, who already is searching for a tenant after CVS/pharmacy (an original tenant) vacated earlier in the year.

Joy’s Hallmark had been at the center for over twenty years, and also has a location at Kirkwood Mall, which the company says is staying open.

Conlin’s Furniture, who first arrived in Bismarck upon purchasing Reff Furniture in 1955, relocated from downtown to Gateway Mall at the end of 2004, occupying a space left mostly vacant since 1994.

The space that currently occupies Conlin’s Furniture originally housed local department store A.W. Lucas, a company first established in 1899. Lucas closed not long after relocating to the mall, but was immediately replaced by Herberger’s, who also left in 1994 upon expanding their Kirkwood Mall location. Since then, the space was unable to maintain stable tenants for ten years until Conlin’s occupied the spot. Jacob’s Trading Company, later known as World’s Greatest Deals, occupied the space for a short time inbetween Herberger’s and Conlin’s.

This now marks the fourth time a major retailer vacates the space occupied by Conlin’s, at a time when the mall is already facing high vacancies. The space is lsited at 70,000 square feet, which is a typical sized department store. In an down economy, it seems likely the space will sit empty for some time.

Although Conlin’s new location has not been confirmed, many suspect it will occupy the former Home Depot building, empty since the big box DIY chain left in 2008. This seems to be the only space large enough in the city to house Conlin’s Furniture, and it seems unlikely they are planning to construct their own location.

The Home Depot building is larger than the space it currently occupies, which means the retailer may be sharing part of the building with another business, much like Office Depot and Big Lots! share the former BEST building. Or, if Conlin’s chooses to occupy the entire building, the retailer may be planning to build a furniture “super store” with a larger sales floor; or relocate some of their warehouse space into the building.