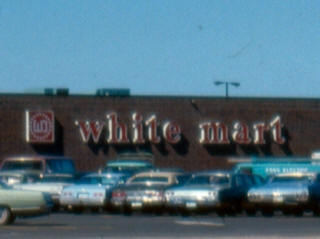 White Mart was an original anchor when Gateway Mall opened in 1979, but closed in 1986.

Unlike its White Drug counterpart, most White Mart stores did not feature pharmacies (although some did). Both types of stores were often referred to as simply “White’s” in advertisements and in-store signage. The White Mart logo was only a slight variation of the White Drug logo of the era, featured in red (and sometimes orange) rather than White Drug’s green.

Shortly after White Drug merged with Brainerd, Minnesota-based Thrifty Drug, the newly formed Thrifty White chose to focus mainly on its drugstore operations and slowly faded out the White Mart concept, largely due to increasing competition from national discount department chains. The Bismarck store was one of the first shedded, closing in 1986 amidst a flooded market containing both Target and Kmart.

As of 1990, there were still eight White Mart stores in operation, in addition to the company’s drugstores. By the end of the decade, however, all remaining White Marts were either closed or rebranded as White Drug or Thrifty White as the company slowly shifted focus entirely on its drugstore operations.

White Drug continues to operate in Downtown Bismarck. Notice the similarities in its logo to the White Mart logo.

Despite its official discontinuation, the name “White Mart” is still sometimes seen in directories and other sources, however these stores are now operated as White Drug or Thrifty White stores. Today, the company operates drugstores in six states.

NOTE: The current Mandan store had opened in March 1990 as a Thrifty White, however since the store was about 5,000 square feet larger than the company’s typical drugstore, the Mandan store featured several departments that were usually only found at White Mart stores, including music and clothing. I have been unable to confirm if an actual “White Mart” ever operated in Mandan.