Memorial Highway’s Ghostly Reminders of What Once Was 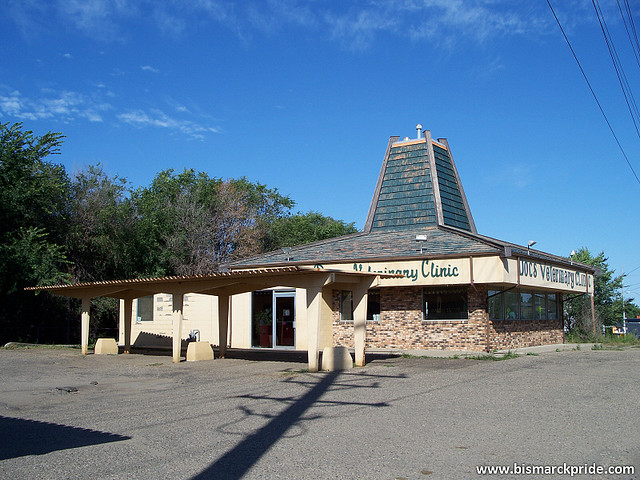 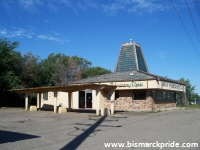 Take a drive down Memorial Highway in Bismarck and it’s hard to miss the ghostly reminders of what once was a thriving part of the city. Named for the historic Liberty Memorial Bridge, which was the region’s first vehicular bridge to span the Missouri River, and remained the only such bridge within 500 miles. Completed in 1922, the Liberty Memorial Bridge completed the coast-to-coast link of U.S. Highway 10.

Major development near the bridge did not begin until the 1950s, and was primarily residential construction. Due to its close proximity to Sertoma Park and the Missouri River, it was considered a privileged area to reside in.

With thousands of vehicles crossing the region’s only vehicular bridge each day, Memorial Highway and the concurrent Main Avenue were one of the busiest stretches of roads in the city at the time, poised to be a major business hub. U.S. Highway 10 was the main route through the state, running from Washington to Michigan. It directly connected the region to such major cities as Seattle and Minneapolis.

Bismarck’s downtown district had already been firmly established by the time the highway was laid out, which ran through the very heart of Bismarck’s central business district. Downtown businesses were thriving amidst the never-ending flow of traffic from the highway and railroad. But, as the city expanded, new businesses had to find new ground to be successful.

When Bismarck’s Holiday Inn opened in 1962 at a cost of $1.3 million, it immediately sparked rapid construction in the area. The Holiday Inn had been built at the very spot where Memorial Highway and Main Avenue joined on their approach to the bridge. It was perhaps the city’s most important chunk of land at the time.

The opening of the Holiday Inn was quite an exciting event. At a time when the historic Patterson and Grand Pacific Hotels still reigned, the Holiday Inn forever changed the way commuters spent a night in Bismarck.

Overnight, the hotel instantly gained dominance in the city. The aging Patterson Hotel, which had once been reigned as the most luxurious hotel between Seattle and Minneapolis, was nowhere near able to compete with the luxurious amenities offered at the city’s most modern hotel. 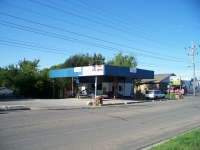 Other businesses soon opened near the Holiday Inn. Among the most prominent included a Standard Service Station, A&W Drive-in Restaurant, furniture store, and bars and restaurants. Strip malls also began appearing along Memorial Highway. One of the city’s biggest and luxurious apartment complexes of the time was built in 1969 only blocks from the Holiday Inn.

It was indeed the hustle and bustle of the city at the time, second only to the downtown business district. The Holiday Inn was enjoying major success, both financially and by reputation. It received top ratings from the most important agencies, including AAA. Dan Mayer, the hotel’s sales director, was recognized at the chain’s corporate headquarters for the successes of the hotel; and the hotel’s restaurant manager was also recognized for his achievements.

With all these successes, you’d think that the Bismarck Holiday Inn would still be raking in the dough. So what went wrong? How did a nationally recognized hotel, top rated hotel succumb after less than four decades?

That important chunk of land at the entrance of the Liberty Memorial Bridge ended up not being as prominent as originally thought. No one had anticipated when the hotel opened in 1962 that a new interstate highway would be built two miles north of the former U.S. Highway 10. Interstate 94 and the Grant Marsh Bridge opened in 1965, just three years after the opening Bismarck’s finest hotel.

The opening of the new highway put an incredible strain on all businesses located along Highway 10, including the highly rated Holiday Inn. The opening of the Town House Hotel (now Kelly Inn) in 1970 near the newly completely interstate put a greater strain on the profits of the Holiday Inn, however it still continued to find success. So much success, that the Holiday Inn completed a new 6-store tower in 1972, more than doubling the room count to 261 rooms.

By the late 1980s, the poorly located and increasingly outdated hotel was no longer able to compete. The hotel would soon become Hotel Bismarck & Convention Center, and later the Palace Arms Hotel. The pool area was filled in and closed, along with the lounge and award-winning restaurant. 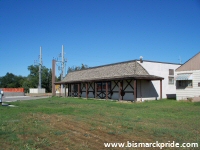 The Holiday Inn was not the only business in the area to suffer following the opening of the Grant Marsh Bridge, and later the Expressway Bridge. The Amoco gas station and A&W Restaurant both closed sometime in the early 1990s, amongst other businesses.

The hotel had gone from an award-winning hotel, one of the most successful in the chain, to a local hangout for criminals. In 2001 alone, the year the hotel ultimately closed, there were nearly 200 police calls to the Palace Arms Hotel.

When the hotel closed in December 2001, most of the building had already been closed off. Less than a dozen rooms were rented, all weekly renters. Garbage and other debris filled the badly lit building, and vandals had repeatedly struck the building inside and out. The building was demolished in 2006 to make way for the new Bank of North Dakota building.

The Holiday Inn brand did not leave Bismarck upon vacating the west Bismarck hotel. The Sheraton Inn was re-branded a Holiday Inn for years before once again re-branding to Radisson Inn, as it remains today. A Holiday Inn Express was built in 2004 in North Bismarck and is all that currently serves the Bismarck area with the Holiday Inn name.

Driving down Memorial Highway today, there are still remnants of what once was a thriving business center for the city. The Standard Service/Amoco Station still sits with most of its features in tact, housing a soup kitchen. The former A&W Drive-in is home to a veterinary clinic; the carports were carhops once skated out your food still standing. Many of the houses, apartments, and businesses are starting show obvious signs of aging. The only sign of revitalization is the completion of the beautiful new headquarters for Bank of North Dakota, sitting on the site of the former Holiday Inn Hotel, pointing ever-so-boldly at the New Liberty Memorial Bridge.