2009 A Year of Business Closures & Relocations 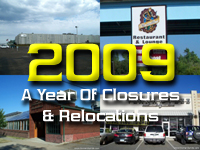 Bobcat will be closing its Bismarck plant this week.

2010 is just around the corner, but unfortunately some of the familiar businesses once dotting our landscape will not follow us into the new year, and a few others will have a change of scenery.

The most impactful of these will no doubt be Bobcat Manufacturing, whose closure on December 23 will result in the loss of nearly 500 jobs in the area. Bobcat, as Melroe Manufacturing, had opened its Bismarck plant in 1974.

Tuesday Morning’s last days at Pinehurst Square are here. The national retailer has stated it will be closing the Bismarck store sometime in January.

Vlana Vlee will soon be closing its Bismarck store located at Pinehurst Square.

Vlana Vlee will be closing its Bismarck store at Pinehurst Square within days due to an apparent disapproval of the center’s management involving reported structural problems. The retailer, which will continue operating its store in Fargo, was an original tenant at Pinehurst Square.

Very recently, Kathy Fowler announced she was retiring and closing her photography studio after 27 years in business.

CVS/pharmacy will soon be relocating from Kirkwood Mall into its brand-new freestanding store, located on the former site of Kirkwood Tesoro and Los Amigos, directly northwest of Kirkwood Mall. The building has been completed for some time now, however the retailer had been waiting to relocate until after the new year – similar to when CVS relocated its Gateway Mall location last February. Its relocation will mark the ending of an era, as Osco Drug (acquired by CVS in 2006) was an original tenant at Kirkwood Mall when the center opened in 1971.

Conlin's Furniture will soon be relocating into this building on Broadway Avenue.

Conlin’s Furniture’s last day at Gateway Mall is December 23, at which time the long-time local retailer will relocate into the former Warehouse Market building on Broadway Avenue & 18th Street. This will mark the 4th location Conlin’s has had in Bismarck since its purchase of Reff’s Furniture in 1955. It has been at Gateway Mall since 2004, filling a spot that had sat mostly empty since Herbergers closed its Gateway Mall store nearly a decade earlier.

Rex TV & Appliance shut its doors last April after the company merged with Florida-based Appliance Direct, who chose not to convert the Bismarck location into their format. Rex, who once had 3 locations in North Dakota, had come to Bismarck in 1995. No official reason was given for the store’s closure, but increased competition in recent years, most notably from Best Buy, presumably had put considerable strain on the store.

Joy’s Hallmark closed its Gateway Mall location amidst a pending lawsuit its owner filed against Gateway Fashion Mall owner, Raymond Arjmand. Joy’s Hallmark continues to operate its location at Kirkwood Mall, which interestingly enough is one of two Hallmark stores at the center.

Captain Meriwether’s Landing closed in September, a result of dwindling profits, partially contributed by the closure of River Road for most of the summer. Its owners had been trying to sell the riverfront restaurant for well over a year before ultimately closing.

The former greenhouse for Hoskins-Meyer.

Hoskins-Meyer Floral offically became defunct after its former greenhouse, which had closed abruptly in Fall 2009, was foreclosed on last spring – forever sealing the century-old retailer’s fate. The retailer had started as a cigar, stationery, and dry goods store more than 100 years ago. It later added other departments, becoming one of the first local stores to offer photo developing services. Philip Meyer had established Bismarck’s first radio station – KFYR – in 1925.

Just as we still remember old favorites long gone, these familiar names will remain in our memories for years to come. These closures do, however, bring the unfortunate revolation that the downed economy has indeed reached North Dakota.