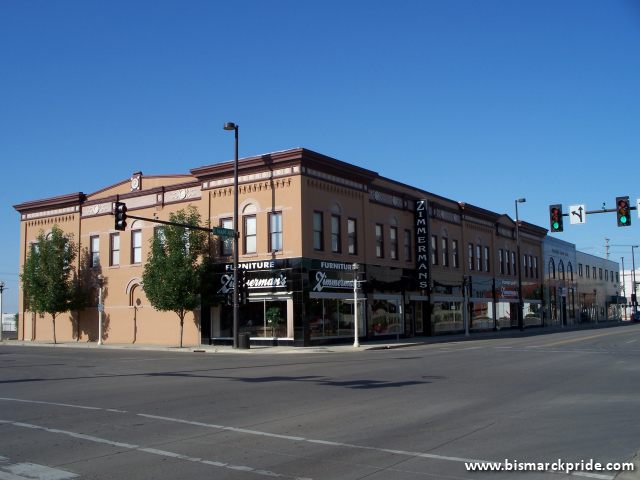 For five years, Webb Borthers was the only dry goods store in Bismarck; and, the only furniture store between Jamestown, North Dakota and Glendive, Montana for twelve years. When competitor A.W. Lucas & Company opened in 1899, Webb Brothers eagerly welcomed the competition, even providing financial assistance to their new competitor. The Webbs believed that the increased competition would improve Bismarck’s appeal as a shopping destination. The strategy proved successfully, with sales increasing after the opening of A.W. Lucas.

The Webb brothers, William and Philip, came to Bismarck in 1884 from New Jersey and purchased the W.D. Smith & Company furniture store at 514 Main Avenue. Soon after, Webb Brothers relocated to 223 Main Avenue.

In 1892, the Webbs acquired the Dan Eiusenberg dry goods store inside the Dakota Block. Two years later, they consolidated their furniture and dry goods stores inside the Raymond Block. It was then that they began conceiving the idea of organizing a department store.

In reorganizing into a department store, the Webbs once again relocated at the end of 1898, this time leasing 75 feet of the eastern side of the newly completed McKenzie Block, later known as the Webb Brothers Block, at the corner of Main and Fourth, where it remained for the rest of its existence. It expanded with a two-story brick storehouse addition in 1906 to house its furniture and funeral undertaking operations.

In addition to the namesake store and funeral parlor, the Webb Brothers Block housed the post office and Federal District Courtrooms until the completion of the first Federal Building in 1913. The building also temporarily housed state government offices following the original Capitol’s destruction in 1930.

Philip retired in 1921, but William continued to operate the business. In 1928, exited the dry goods business, transition to a traditional department store while also expanding their furniture selection. That same year also saw a change in ownership to William’s sons, Philip and Robert.

Following Webb Brothers, the building underwent major renovation to house Sears, who remained at the site until relocating to Gateway Mall in 1979. Conlin’s Furniture occupied the building until 2004 when it, too, relocated to Gateway Mall. During’s Conlin’s occupancy, the white facade added by Sears was removed, restoring the building’s original appearance.

Today, the building is home to Zimmerman’s Furniture.

William Webb served one term as Bismarck mayor. He also served on the city council and as chairman and president of several organizations, including the board of county commissioners.