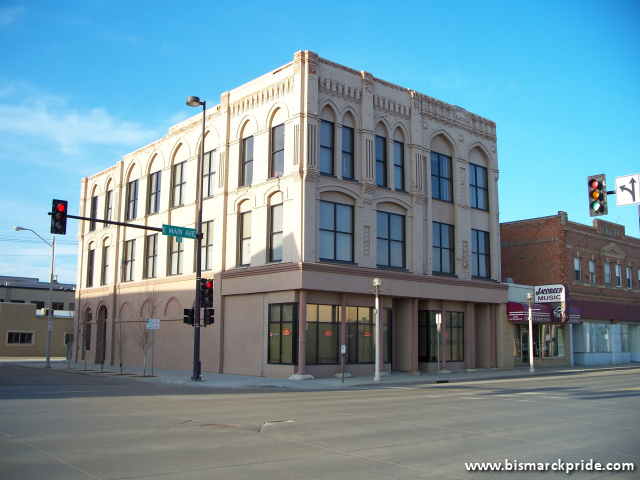 The Dakota Block is a historic building located on the northeast corner of 2nd Street and Main Avenue. One of the few buildings to survive the 1898 fire, it is likely Bismarck’s second oldest surviving building, after the log house at Camp Hancock. It is a Gothic Revival style.

The building was first announced in November 1882 and completed in 1883 for about $34,000. The three-story structure originally comprised of three 25-foot frontage bays, but the eastern-most section has since been demolished and a new building – housing Jacobsen Music (as of 2018) and formerly Wylie Music – erected in its place.

It was a joint venture by Doctor Porter, and Misters Goff and Thompson.

It’s unclear the cause or timeline of the eastern section’s demise. Bismarck’s online property search indicates the replacement building was erected in 1890, but the section was present as late as the 1950s.

The Dakota Block was one of several major brick structures erected in 1883. It represented the most modern building techniques of the era. It was also the city’s second-largest private building, after First National Bank – also completed in 1883.

In 1999, the city commission authorized $46,000 in Tax Increment Financing (TIF) for the building’s renovation. The project concludes in 2002.