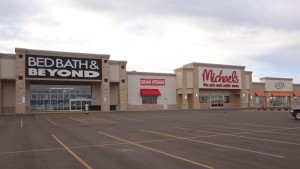 Hay Creek Shops is an outdoor “power mall” located in north Bismarck. It was the city’s largest development since Pinehurst Square, bringing several new national and regional retailers to the region.

Gordman’s was the center’s first tenant announced, in 2013. After delays, including a loan default, Phase 1 of the center opened in 2015. Phase 2 opened in 2016, with such additions as Ross Dress For Less and Kirkland’s.

Most of the tenants were newcomers to the market, but some, including Famous Footwear, Maurices, Classy Nails, Mattress Firm, Dollar Tree, and Erbert’s & Gerbert’s already maintained Bismarck locations.