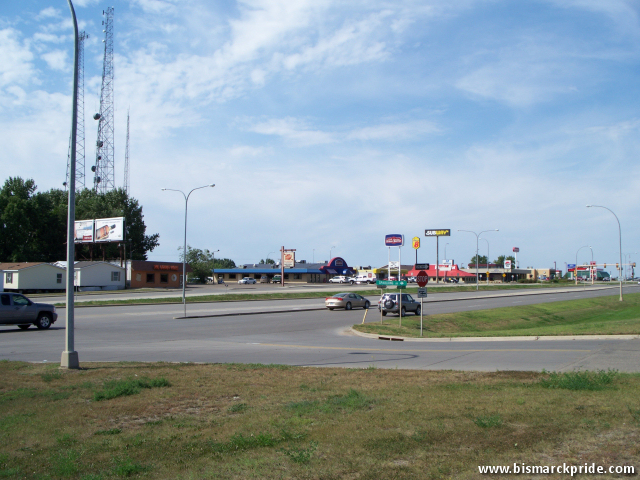 State Street is a divided primary arterial road serving Bismarck consisting of six lanes between Boulevard and Calgary Avenues, when it continues as a four-lane divided highway. The stretch north of Interstate 94 is also designated U.S. Highway 83, and serves as a direct route from Bismarck to Minot and Canada. State Street supports a major commercial corridor that includes two regional shopping centers: Gateway Fashion Mall  and Hay Creek Shops.

With the exception of Interstate 94, it is the region’s most traveled road, with some stretches topping more than 40,000 vehicles per day (VPD), as of 2016. By comparison, Bismarck Expressway, Century Avenue, and The Strip averaged closer to 15,000 VPD in 2016. Its volume has nearly doubled since its most recent improvement project, completed in 2003, when the daily vehicle count was 22,750. As a result, stretches of State Street can get congested during peak commute times.

State Street is also statistically the most likely road for vehicle crashes, containing 6 of the top 10 intersections with the most local crashes.

In 1964, the road that would become known as State Street was graded and asphalted to Calgary Avenue. That same year, interchange ramps were built for I-94, which opened the following year. The bridge spanning I-94 was originally two separate structures, until being widened and combined as a single structure in 1980.

The name “State Street” was formally designated by the City Commission in 1975, from Boulevard Avenue north.

State Street was widened to six lanes between Divide Avenue and Century Avenue in 1979, with the exception of the I-94 bridge, which wasn’t widened until the following year, officially completing the lane expansion project.

New traffic signals were installed at the I-94 interchange, Century Avenue, and Capitol Avenue, while those at Divide and Interstate Avenues were upgraded.

The grade at the west approach from Interstate Avenue was also reduced.

A pedestrian overpass was built alongside the I-94 bridge in 1981.

The upgrades were part of a bigger project that widened Highway 83 to four lanes between Bismarck and Washburn by 1983, anticipating four lanes to Minot by 1985. 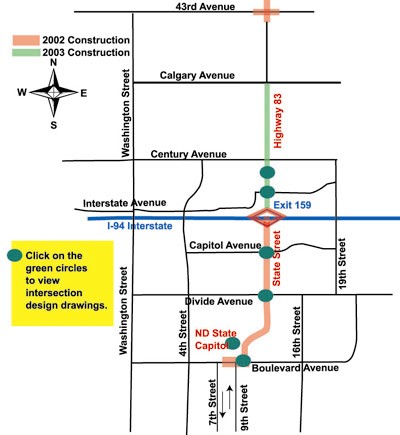 State Street was redeveloped in the early 2000s. The two-year, $17.6 million project commenced in 2002, between 43rd Avenue and 6th Street. The project was 80% federally funded.

While the project didn’t add additional lanes, improvements included intersection upgrades, updating the I-94 interchange, utility work, and improvements to the curbs and gutters. Left turning from access points to Gateway Mall and Kmart were also eliminated, while new traffic signals debuted at the Menards entrance and Calgary Avenue. The interchange at Boulevard Avenue also saw an improvement.

The project restricted traffic to two lanes and even completely shut down State Street at times. As a consequence, the nearest north-south arterials, 19th and 4th Streets, witnessed traffic volumes greatly increase. New traffic signals debuted at 19th Street and Capitol and at 4th Street and Interstate Avenue. The signals were initially intend to be temporary, but later made permanent with the shifted traffic pattern.

For decades, the corridor has seen steady northern sprawl from its Divide Avenue southern base. Kmart opened in October 1971, providing the first impetuous for mass development, followed by Gateway Mall in 1979.

Development along the corridor slowed by the 1990s. With few exceptions, notably Stan Puklich Chevrolet and isolated residential and office units, the corridor ended at Century Avenue until the 2000s.

Current restaurants (from south to north):