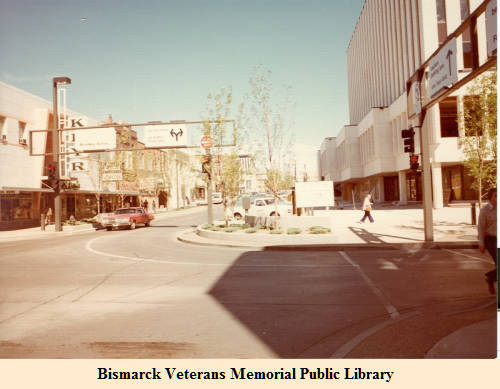 4th and Broadway in the 1970s, shortly after the one-way conversion. (Bismarck: Capital City Memories: 1d-304a)

Chancellor Square is the designated name given to a six-square-block portion of downtown Bismarck between 4th and 6th Streets, and Broadway and Thayer Avenues. The Square was formally dedicated in 1976 as an Urban Renewal project.

As part of the dedication, new signs were erected featuring a leaf design from the Square’s official logo. Many of the signs remain to this day.

Until 2017, Chancellor Square was well known for its one-way loop.

Chancellor Square was first announced before a crowd of 75 people at the Four Seasons Grand Pacific Hotel Hall on June 27, 1973. The idea conceptualized a “mini-mall with green space and diagonal parking, climatized skyways, a park surround the train depot, and even double-decker buses shuttling shoppers between downtown and Kirkwood Mall.”

At the time, downtown Bismarck was a popular retail center, with major retailers J.C. Penney, Sears, and Woolworth joining such popular local establishments as A.W. Lucas. The then-smaller Kirkwood Mall had just opened three years prior and Gateway Mall was years away from development. One of the primary goals of the project was to improve flow between the city’s two shopping centers: Downtown and nearby Kirkwood Mall.

The City Commission greenlit the project on May 14, 1974, contingent on addressing two concerns. The first concern was eliminating a curb cut at Kokkeler Jewelers, which the retailer objected to because of access concerns to its parking lot. The other was an underground vault at the Cowan Building, which was beneath Broadway Avenue.

In the end, the completed Chancellor Square project was less elaborate than the original planned cityscape. The six blocks of climate-controlled skyways never came to fruition. Chancellor Square’s most significant impact was converting the downtown stretches of 4th and 6th Streets, and of Thayer and Broadway Avenues to one-ways, creating a square loop. As well, diagonal parking was added with light bollards lining the nearby curbs. Built-in benches were constructed and and an estimated 1,500 trees and shrubs were planted, including 89 ash trees. Curbs were bumped out at crossing to improve pedestrian safety. Lastly, an official debuted and and numerous replacement signs installed.

Downtown’s first skyway was constructed along with the Galleria parking ramp, in 1983. Medcenter One began construction of a skyway over Rosser Avenue in 1991. Attempts to complete the skyway network continued, as late as 1999.

By 1994, efforts were already being taken to restore the downtown one-way loop to two-way traffic, which was ultimately completed in 2017.