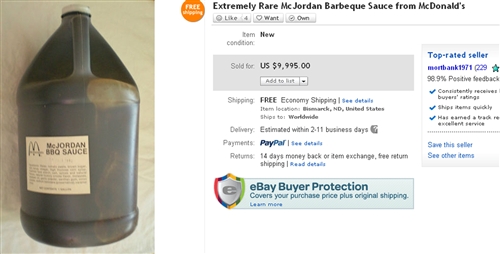 Prior to founding the successful chain of alien-themed restaurants from the final frontier, local resident Mort Bank had found his initial success as an operator of several McDonald’s restaurants, including the McRock Cafe on Main Avenue in Bismarck.

This busy entrepreneur has now made big bucks from something rather surprising… a $10,000 winning eBay bid for a one gallon tub of expired barbeque sauce. This is no ordinary sauce, however, nor is it Space Aliens’ award-winning sauce. This was a one gallon tub of McJordan Barbecue Sauce, which was offered for only a limited time in limited markets.

The sauce apparently had a listed expiration of December 1992.

Mort Bank opened his first McDonald’s in 1971 in Bismarck. One of his most famous McDonald’s incarnations, however, is the McRock Cafe. Mort started Space Aliens Bar & Grill, also in Bismarck, in 1997.