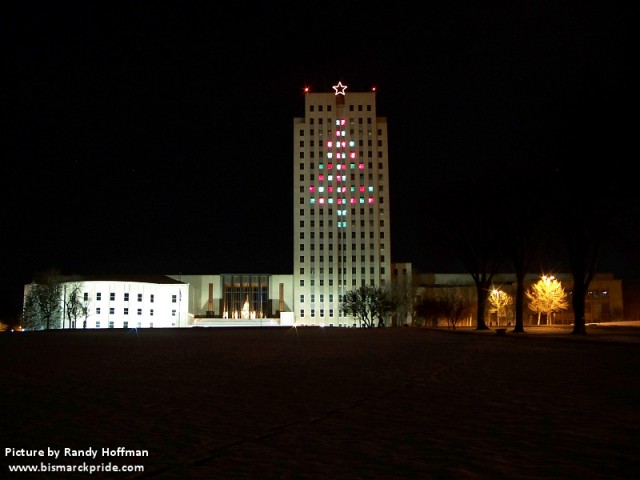 Each Christmas season, the windows of the North Dakota State Capitol sport the picture of a Christmas Tree on the north and south sides of the structure. During the 4th of July, the windows spell “4TH” and at New Year’s they display the digits of the upcoming year.

A total of 88 shades are used to form the Christmas Tree shape; 40 red and 44 green. The tradition started in the mid-1940s, about a decade after the building’s completion. The similar New Year’s tradition began in the 1970s, and the 4th of July even more recently.

The 19-story art deco North Dakota State Capitol was completed in 1934, replacing the original 1884-built capitol that was destroyed by fire on December 28, 1930. An additional wing housing the Judicial Branch was added in 1981. Due to its distinction as the tallest building in North Dakota, the Capitol carries the nickname “Skyscraper on the prairie”.