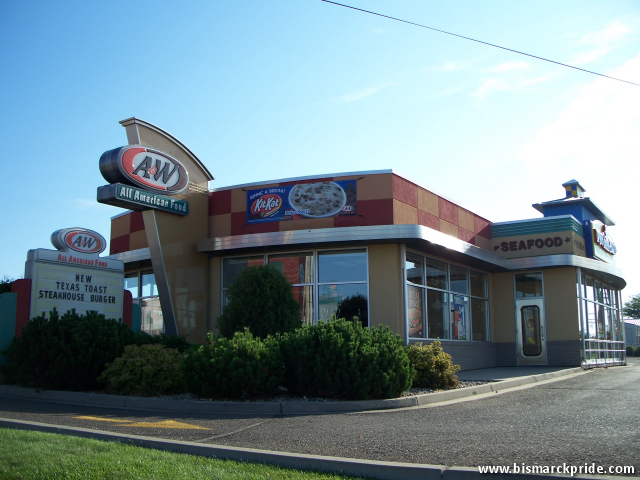 The A&W/Long John Silver’s hybrid restaurant located at the corner of Front Avenue & 3rd Street will soon be changing formats. The restaurant has been up for sale for several months now, after it was reported that the franchisers no longer wished to maintain a location in Bismarck. The last day in its current format will be tomorrow, at which time the restaurant will be remodeled to reopen in a few weeks as “Reza’s Pitch” – named after a Soccer term.

The A&W/Long John Silver’s restaurant had opened in 1997. It was designed to mimmick the classic A&W Drive-ins, complete with carhops. Although the carports still remain, they have not been used for some time, replaced with a standard drive-through window.

This is not the first time A&W has left the region. A location had existed for many years on Memorial Highway across from what was then known as the Holiday Inn, near the entrance to the Liberty Memorial Bridge. That location closed sometime in the early 1990s.

There were several later attempts to return the name to Bismarck prior to its location on Front Avenue, including a small concession stand at Kirkwood Mall and a location at Cenex on Divide, which had featured drive-through service.

In 2007, a second location was constructed on State Street; however, after reportedly being unable to find employees, the building soon became home to Wendy’s.

After rebranding, the closest A&W Restaurants will be located in Minot and Dickinson, and the closest Long John Silver’s locations in Fargo and Aberdeen.