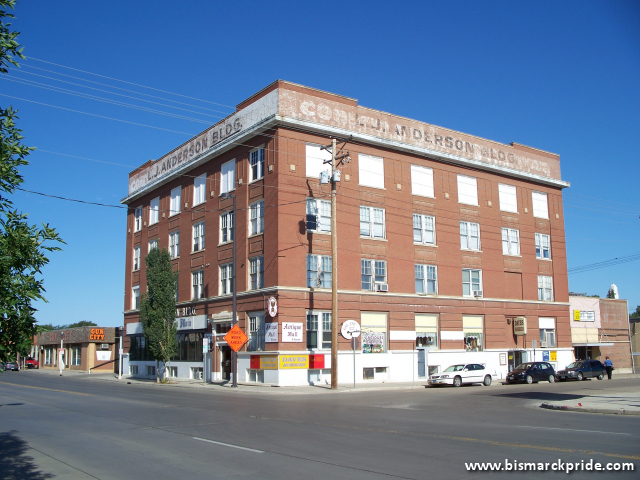 The International Harvester Company was a national manufacturing company, specializing in agricultural machinery and construction equipment. The company was based in Chicago and maintained a branch in Bismarck for many years.

International Harvester had constructed its local warehouse in 1911 on the corner of Main Avenue and Mandan Street. International Harvester vacated the warehouse in the late 1930s and the building. From 1954 until 1968, it was home to Conrad Publishing Company, whose letters are still slightly visible beneath the current signage. Following Conrad’s absence, the building was renovated into its current multi-use purpose, with office and commercial space occupying the lower levels and apartments above. Today is is known as the L.J. Anderson Building, named for Loren J. Anderson. For many years, it was home to Dave’s Hobbies and Boyd’s Ark Pet Store.

The company’s showroom, which operated as the IH McCormick Store, was located on the corner of Broadway Avenue and Mandan Street. The building has more recently housed One Source Lighting and Proximal 50 Life Center. Prior to that, the building was home to an automotive supply store.