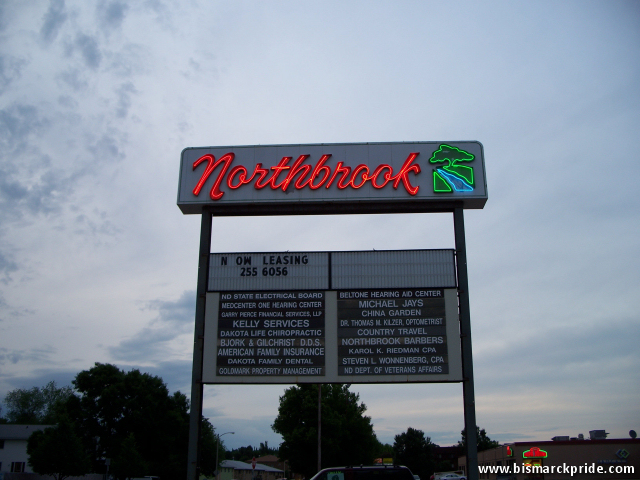 Construction of Northbrook began in 1962, with a grand opening the following year. Two additions were completed in 1967 and 1971, and the mall was significantly remodeled in 1986.

By the 2000s, Northbrook’s position as a competitive shopping center had ended.

Today, the mall has evolved into a mixed-used facility known, unofficially, as Northbrook Professional Center. For many years, its primary tenant has been the state government’s ITD department. A few other notable tenants (as of 2017) include Thrifty White Pharmacy (previously Northbrook Drug), Universal Athletics, Michael Jays Tattoo and Piercing, China Garden, Papa John’s Pizza, and a handful of professional services.

Northbrook Mall was announced on July 14, 1962. Much like Arrowhead Plaza before it, Northbrook complimented a larger development, in this case, Homan Acres.

Forsberg owned the shopping center itself, leasing the land from United. A member of the Kavaney family was a principal in United, namesake of the bordering Kavaney Drive. The Kavaney family later has a hand in developing Gateway Mall, which opens in 1979.

Northbrook Mall spanned 72,950 square feet upon opening in 1963. Red Owl and Tempo, corporate siblings under the Minnesota-based conglomerate Gamble-Skogmo, anchored Northbrook when it officially opened on May 1st, which coincided with Red Owl’s opening. Tempo preceded by a couple weeks, on April 17th.

The 12,000-square-foot Red Owl store supplemented its downtown (then at 411 N 4th Street) and Mandan locations, easily establishing itself as the region’s dominant grocer. It had five checkout lanes and a service counter.

In the grand opening announcement, the enclosed mall – still a relatively new concept – introduced the shopping experience of entering a single exterior door to “leisurely” enjoy an afternoon of shopping “without being bothered by cold, wind, or sudden showers.” It was described as a “broad, covered walkway, which extends in an L-shaped manner connecting the various businesses located” within.

Two major additions were added within its first few years of operation. The first was in 1967, adding two wings adjoining Tempo, one to its east and another, significant smaller addition to its northwest. The second, in 1971, expanded upon the eastern 1967 addition.

Tempo – the mall’s largest tenant – closed unexpectedly in May 1976, despite having six years remaining on its lease. Its former 45,000-square-foot space was converted into a “mini mall” to house multiple tenants. The “Northbrook Mini Mall,” as it would be referred, was divvied into 35 spaces averaging 1,200-1,500 square feet each, with the largest space being that of Hardware Hank at 6,500 square feet. The heart of the mini mall was an octagonal layout.

The new mini mall concept debuted in October 1977, with a grand opening in March 1978. In addition to Hardware Hank, new tenants to occupy Northbrook within the next year included The Wok, Hansen’s Mens Wear, The Cheddar Box, The Kitchen Cupboard, Feist TV and Electronics, and The Earth Pantry. A full-service post office and a drivers license service center were also established at this time.

In 1979, a partnership headed by Dan Schmaltz acquired Northbrook Mall from United Development Corporation. Soon after, mall management announced expansion plans that, when completed in 1981, would have added a movie theater, variety store, and recreation center to the north. Despite obtaining necessary financing, these never materialized.

While not technically foreclosed, First Bank Bismarck acquired the shopping center in lieu of outstanding debt in 1983.

Northbrook’s occupancy rate had dwindled to 58% by the time Midwest Management (now GOLDMARK) assumed management of the mall in late 1986.

The rise in vacancies was attributed to business closures as a result of inflation and higher interest rates, and to increased competition from other shopping centers, particularly nearby Gateway Mall.

A $500,000- renovation project commenced soon after. By July 1987, occupancy had risen to 90%. Northbrook had been rejuvenated, for the moment.

The newly renovated 15,600-square-foot grocer added a new bakery, deli, and “smokehouse” for custom-made sausages. It also expanded its meat and produce departments.

Its efforts proved unsuccessful, however, and both Bismarck Red Owl locations permanently closed in March 1989.

This resulted in Northbrook’s largest tenant and sole anchor unoccupied. Like its Tempo counterpart previously, the space was split to house multiple tenants.

Throughout the 1990s and into the 2000s, Northbrook again struggled with high vacancies. Today, Northbrook mostly houses professional services, along with a small handful of retail and restaurants. Its change in tenant structure has lead to its new identity of Northbrook Professional Center.

Northbrook’s long-standing pylon sign (pictured here) was replaced in 2017. It was not the original sign, likely erected during the 1986 renovation.

Those still operating, or their successors, are in bold (as of 2017).