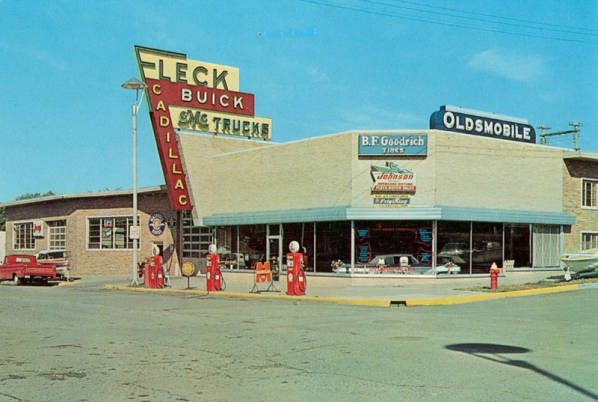 Fleck Motors was an automobile dealership in Bismarck for decades. It ultimately became Wilhelm before closing in 2007. Its long-time showroom at 100 W Broadway Avenue was demolished in 2010 for Broadway Centre.

For most of its existence, it sold Buick, Oldsmobile, and Cadillac brands of General Motors.

R.J. Fleck, who was a breeder of driving and saddle horses in Richardton, North Dakota, recognized the “horseless carriage” revolution when he founded the automobile dealership with his father in 1915.

It originally sold Marion Handley, Imperial, and Dort vehicles. In 1917, Fleck obtained its long-standing Buick franchise agreement from an Underwood firm, Hendricks and Landgren. Fleck’s relocated its dealership to Mandan the following year, in 1918.

Fleck opened its first Bismarck location in 1921, operating a garage and service station at 215 E Main Avenue. Its Mandan location was sold in 1925. It moved again, in or about 1927, to 618 E Main Avenue.

In 1931, Fleck moved its operations to the former Ingstad Garage building at 100 W Broadway, where it remained for decades. Fleck Motors announced that it would add a 60-foot glass showroom to the building’s south side. Built in 1928, it was the largest single-story garage in North Dakota at the time.

Fleck also operated at 102 W Main Avenue, as of 1949. That same year, Fleck announced plans to construct a new two-story garage – an independent Oldsmobile dealership – on the 300 block of Main Avenue (now home to Fleck’s Furniture and Appliance). To commemorate the dealership’s opening, in 1950, Fleck hosted the General Motors Mid-Century $100,00 auto show.

Another controversy rang out in 1945 revolving the fact that the Ford dealership was managed by Earle Tucker, instead of John Fleck, who was the majority owner – a violation in Ford’s agreement, which stated that the manager of a dealership must also own the most stock. Mr. Fleck was told he either had to sell his interest in the company, or return to active management. He chose not to return to manage the dealership and sold his interest in Universal Motor Company.

After selling his stock in Universal Motor Company, Fleck continued to operate Fleck Motors with his brother, Jack Fleck. 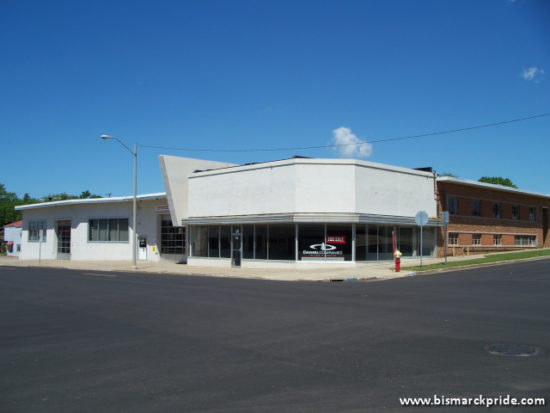 On April 30, 1951, only two days after completing a $60,000 renovation, a fire completely destroyed its facility at the corner of 1st Street and Broadway Avenue. The fire was ignited after a light bulb exploded next to a pan of gasoline. Fueled from its supply of tires and other chemicals, the fire caused an estimated $500,000 in damages… $300,000 from the building itself with the remaining from inventory.

There were nearly 40 vehicles housed inside when the fire broke out. Only about three or four were saved before workers retreated. A brick wall collapsed at 12:45 and, by 1:00, firefighters declared the building a total loss.

It was deemed the city’s largest fire since the State Capitol in 1930, with the last significant fire being the Hinckley building at 219 N 4th Street in 1948.

Operations were shifted to its Oldsmobile dealership at 3rd and Main while a replacement building was completed.

Flecks opened a warehouse and service station at 1105 E Main Avenue at the end of 1951.

Ned Nastrom and Donald Peterson purchased Fleck Motors in 1972, which became Nastrom-Peterson Motors. At the time, it was the city’s largest new car dealer.

In 1986, the dealership’s ownership nearly returned to the Fleck family, when a group that included John Fleck’s grandson, Dan Porter – of Dickinson-based Dan Porter Motors, sought to purchase the dealership. This deal ultimately fell through, at which point Jamestown-based Wilhelm bought the dealership.

The dealership closed in 2007. The building was demolished in 2010 for Broadway Centre.

Fleck’s Furniture & Appliance, located at 313 E Main Avenue, is named for Jack Fleck… a relative of the Flecks who owned Fleck Motors. The furniture and appliance store is housed in the same building that once housed Fleck Motors.

The Flecks also once operated Capital Toyota (later Fleck Toyota Mercedez-Benz) at 1130 Missouri Avenue and dealerships in Mandan and Fargo.

It later became Wilhelm’s Buick-Olds-Cadillac prior to shuttering.

Dan Porter, the grandson of John Fleck who tried to buy back the business in 1986, did eventually operate a local dealership, when he partnered with Stan Mathaller to purchase Mandan’s Century Motors in 1985, located at 4208 Memorial Highway. Century Motors, ironically, started as Wilhelm Courtesy Motors in the 1950s. In 1990, Porter opened another dealership at 931 South 9th Street in Bismarck.