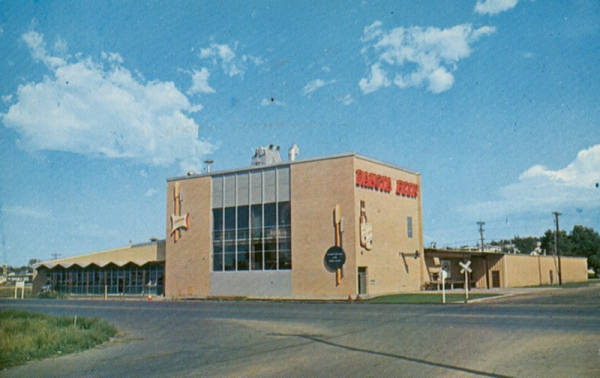 Dakota Malting and Brewing Company was a local brewery that operated from 1961-1965. Its flagship product was Dakota Beer, which is synonymous with the company.

While other breweries have existed in Bismarck throughout the years, it was the first to be locally owned – an exclusivity it held for over 40 years. There have been several recent local breweries to open in Bismarck-Mandan.

Despite its short existence, merchandise and marketing materials of the company is widely sought and available on such sites as eBay.

The company was incorporated on June 6th, 1958 and began offering common stock in July 1959, raising $1 million in capital from 1 million shares priced at $1 each.

The original site selected was near Mandan on the west side of the river, but construction difficulties forced the facility to be located in Bismarck, instead, on the northwest corner of 26th Street & Main Avenue. The 5-acre site was leased for 50 years from Soo Line Railroad. Construction on the steel and brick building commenced on June 9, 1960. The facility was designed for a capacity of 65,000 barrels a year. It contained two wings connected to a 44-foot high brewhouse.

Before operations even commenced, the company faced a mounting obstacle… a state law limiting alcohol production to less than 3%. Luckily, the state legislature was in session that year and passed a bill to change the law.

The company produced its first batch of beer on February 23, 1961. However, issues with the bottle-washing machine yielding in a poor tasting product, souring public reception even after the issue was corrected. Still, the public eventually warmed to the product and production soon exceeded 20,000 barrels a year, with high demand from local taverns.

Despite increased demand, the company’s days were limited. Inadequate financing and high debt forced the brewery out of business, ceasing operations on September 20, 1965… four years after producing its first batch.