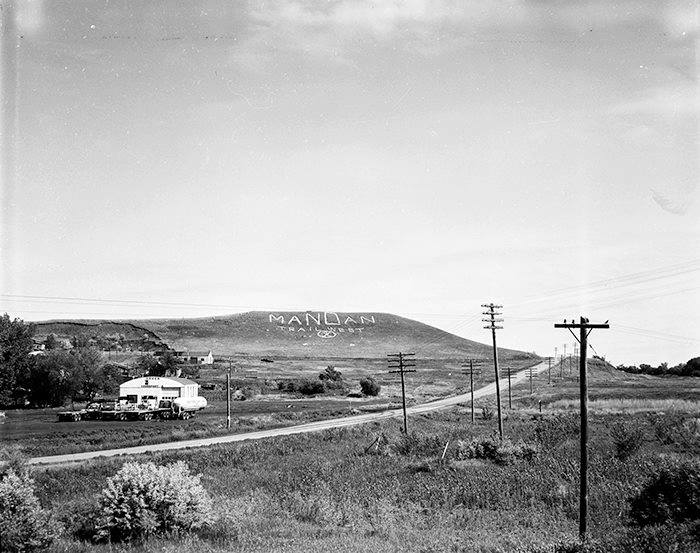 Crying Hill is a historically sacred place for Native American populations that, today, is best known for its prominent “MaNDan” letter spawled in concert across its northeast side and the city spelled out with trees on its south. It is the highest natural point in the area and the state’s largest sign.

The hill has been culturally significant to a number of Native American tribes, including the Mandan, Hidatsa, Arikara, Sioux, and Lakota. Each held various sacred events and rituals on the site. Some reports also say it was used as a burial ground. At least one report, in 1979, referenced bones being discovered at the site.

In 1738, Pierre Gaultier de Varennes, sieur de La Vérendrye – a French Canadian military officer and fur trader who was likely the region’s first European visitor – was supposedly greeted by Mandan Chief Good Fur Blanket just south of the hill. He presented the Mandans with a bronze plate from the king of France, which is allegedly buried on Crying Hill.

Plans for the sign began as early as 1928, when the Squirrel Club announced its intent to plant a 20-25-foot high rock sign on Crying Hill. They also intended to later add “Where the West Begins,” which is still Mandan’s official slogan.

According to the Mandan Historical Society, the famous billboard letters that now adorn the hill were placed by Mandan Boy Scouts in June 1934. Newspaper articles of the era indicate it was actually 1929.

The original sign was 300 foot long and 70 feet high, with the “ND” portion 85 feet high. It involved 12 gallons of paint and 47 truckloads of stone, mostly broken pavement taken from the widening of 6th Avenue NW.

It was rehabbed in June 1959, at which point a second row was added using painted railroad timbers with the words “Trail West” to highlight Fort Abraham Lincoln State Park and a Custer-based drama that was the precursor to today’s “Medora Musical.” It is unclear when the second line was removed, but the original drama ended in 1968.

Various reasons for the sign exist. Other than civic pride, small towns were encouraged to do such practices to help guide pilots.

The stone lettering originally spanned the hill’s south side. It was relocated to its present location on the hill’s northeast in 1987 to face Interstate 94 in response to the addition of a new interchange.

The new sign used concrete instead of stone to discourage vandals. Each of the capital letters are roughly 50 feet long and 40 feet wide, with the lower case letters 30×26. The new letters were comprised of roof breams, purchased by the Mandan Moose, taken from the Morning Pioneer building’s demolition site.

The “MANDAN” lettered trees were planted in the late 1990s in the original location of the stone sign, on the hill’s south.