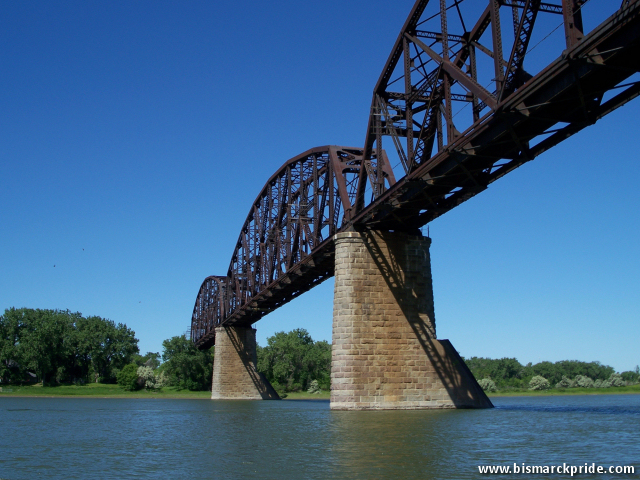 The BNSF Railway Bridge (originally Northern Pacific) is the train bridge spanning the Missouri River between Bismarck and Mandan. It was the first bridge to cross the upper Missouri River.

While the rail line reached Bismarck in 1873, the Panic of 1873 forced construction to halt for six years. Towards the end of 1878, work resumed to extend the railroad west of the Missouri River, as well as a bridge.

The general construction contract was let in January 1881. It was designed after the Plattsmouth bridge, connecting Iowa and Nebraska, and engineered by the same architect… George Morrison.

It finally opened in October 1882, nearly ten years after the railroad first reached Bismarck. While the ceremonial golden spike took place the month prior, in western Montana, the bridge effectively completed the line.

The original granite piers, which still support the bridge to this day, were shored up. In particular, the easternmost pier had been an ongoing problem, shifting towards the river.

Most recently, in 2017, BNSF Railway announced intentions to replace the historic bridge. In an effort to save the icon, a local resident took up a petition with hopes to turn it into a walking bridge. The National Trust for Historic Preservation placed the bridge on its annual list of the top 11 most endangered historic places in 2019.