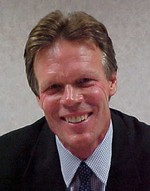 Long-time Bismarck Mayor John Warford has accepted a position as the new Dean of University of Mary’s Gary Tharaldson School of Business. Warford will begin the position when his third mayoral term ends this June.

Warford, who has been Bismarck’s mayor since 2002, won his third term in a landslide 2010 election against challenger Steve Schwab. Bismarck has seen unprecedented growth during his tenure, which also spanned two of the city’s largest floods.

Warford has resided in Bismarck since 1973, where he also operates his orthodontics practice.