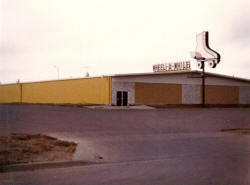 Wheel-A-While was an indoor roller skating rink and recreation center with locations in Bismarck and Dickinson. It was a popular hangout, especially for high school-aged students. In addition to a skating rink, Wheel-A-While also featured a concession stand and other entertainment such as foosball.

The Heiers opened a Dickinson location in 1978 on West Villard, called Wheel-A-While II, which also housed an A&B Pizza. Bill and Donna Leingang then assumed management of the Bismarck branch.

The Dickinson location remained until at least 1985. The original Bismarck location closed in July 1987. New Song Church occupied the building in 1990, where it remains today.

Some consider Wheel-A-While to have been the last safe-place hangout for youths within the city.