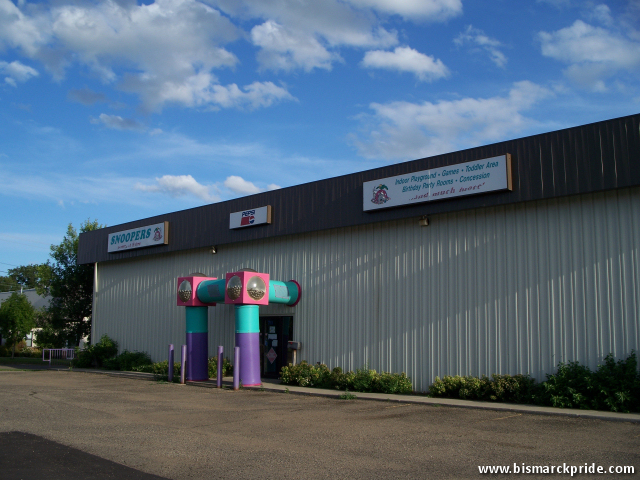 The original, Bump N’ Tilt, opened in 1991 at 3100 N 11th, northeast of Century High School. It got its name from the center’s signature indoor bumper cars, but also featured a full arcade. Snoopers had taken over a previous business called “Bump and Tilt Family Fun Center” that operated on the site between, at least, 1982 until August 1991.

Located at 711 E Sweet Avenue, Tons of Fun opened in 1994 upon purchasing a former appliance store called Rosenbaum’s for $300,000 and converting the building to house the entertainment center.

Bump N’ Tilt and “Tons of Fun” both operated concurrently for a short time before the original shuttered. Jointly, the operations were referred to as Snoopers Family Fun Center. While Bump N’ Tilt focused mainly on arcade games, Tons of Fun featured an indoor three-level children’s playground, along with a game room, concessions, and banquet facilities. Tons of Fun later also housed Giovanni’s Pizza, which relocated from its previous location at the intersection of 16th Street and Thayer Avenue.

Tons of Fun shuttered in 2015 and was replaced by Bisman Community Food Coop. The building originally housed an electronics and appliance store called Rosenbaum’s.