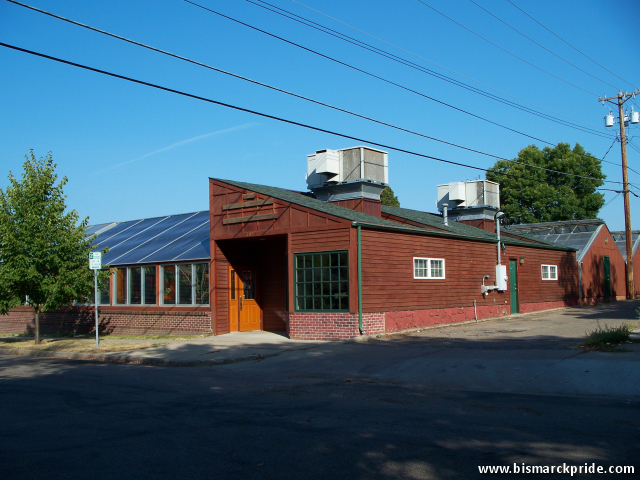 Hoskins-Meyer was a local retailer for more than 100 years, and founder of KFYR and what later became Meyer Broadcasting Company.

Hoskins-Meyer was located on the northwest corner of 4th Street & Broadway Avenue for much of its existence, in the same building still housing KFYR-TV. Its greenhouses were located at 302 East Avenue E.

R.D. Hoskins founded “Hoskins Cigar, Stationery, and Flower Store” in 1898 directly across from the railroad depot. Soon after, it relocated to the Tribune Block at the corner of 4th Street and Broadway Avenue, where it remained for decades and its successor – KFYR-TV – still remains. The first greenhouses were built in 1900.

The retailer was one of the first, if not the first, retailers in the region to offer photofinishing products and services.

Its original greenhouses were rebuilt in 1948 after being destroyed by a hail storm. That same year, the retail operation was sold to Lillian Henlein and John Wachtler. Wesley Bohrer, who started as a delivery person in 1948, bought out Wachtler’s interest in 1964, then Henlein’s interest in 1974.

Hoskins-Meyer vacated its downtown location in 1997, consolidating operations to its greenhouse at 302 E Avenue E.

The store closed unexpectedly at the end of 2008, without any explanation. It was later confirmed that the store closed due to financial reasons and would not re-open. The building which housed the floral retailer from 1950 until its closure, located at 302 East Avenue E, was foreclosed and ultimately auctioned off in July 2009. The former greenhouse was demolished in April 2010 to make room for a new senior housing development.