William L. Guy (1919-2013) was a prominent North Dakota politician who was the state’s longest-serving Governor, during a time of progression, from 1961-1973. He also served in the North Dakota House of Representatives, serving as Minority Leader. Guy was the first elected Governor of the Democratic–Nonpartisan League Party.

Guy is credited for modernizing North Dakota’s government and economy, including implementing a new Office of Management and Budget. It was during his tenure that North Dakota underwent numerous large-scale evolutions, including such federal projects as Interstate 94 and Garrison Dam, advancements in energy production, and ushering in sugar beet refining. Guy also championed for a new state historic museum and established the Theodore Roosevelt Rough Rider Award as the state’s highest recognition. 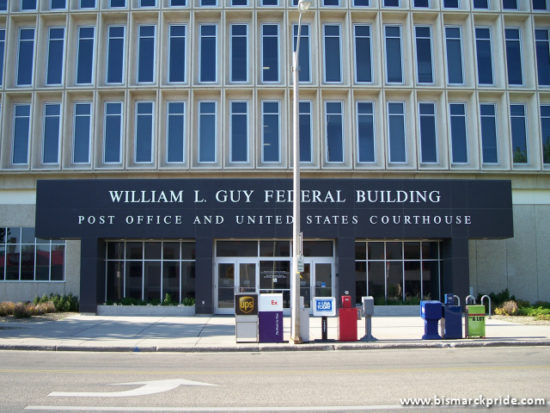 Guy’s influence extended outside of North Dakota too, when President Lyndon Johnson selected Governor Guy to observe the first presidential elections in South Vietnam. In 1966, Guy was elected chairman of the National Governors’ Conference.

Opened in 1964 during his tenure to supplement the original 1913-built facility, Bismarck’s Federal Building was rededicated in his name on November 11, 1999.