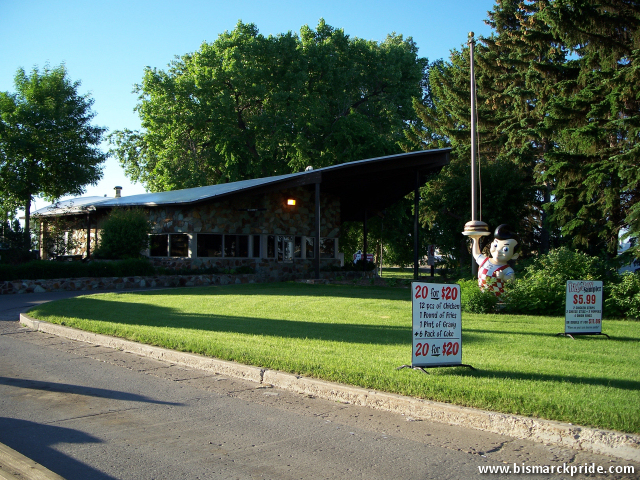 Nestled at the corner of 26th Street & Main Avenue in eastern Bismarck, Big Boy was the city’s first drive-in restaurant when local businessman Harley McDowell opened it on July 1, 1954 – 60 years ago this month. From its “Flying (Saucer) Style” pizza burgers to its Hot N’ Tot cinnamon colas to its original Double Decker sandwich – rumored to have inspired the McDonald’s Big Mac – the restaurant has become a prized local favorite amongst residents and visitors alike.

It’s reasonable to describe Big Boy’s status as a cult following, one even deserving of its own Facebook Fan Page. After all, it’s not uncommon for someone to order a whole handful of pizza burgers to freeze for later enjoyment. Sorry, no more than 45!

While the name and statue are familiar international icons, Bismarck’s Big Boy certainly stands out amongst the chain. It is the only Big Boy to not have indoor seating, and perhaps the only remaining one to still feature drive-through service; a feature that was once common place for Big Boy. The local restaurant’s menu also varies greatly from other locations. In fact, the Big Boy Original and Double Decker are about the only menu items carried over from the national chain.

Founded by local traveling salesman Harley McDowell, Big Boy held its Grand Opening on July 1, 1954. McDowell had seen a Big Boy in a nearby state during a business trip and decided to open one in Bismarck. Other locations soon opened across the state, including a second location in downtown Bismarck. Today, the original location at 26th Street and Main Avenue is the only remaining Big Boy location within nearly a thousand miles.

While McDowell had acquired exclusive rights to the Big Boy name in the state of North Dakota, the location was not officially a franchise of the chain until 1960, shortly after a 1959 lawsuit was filed against McDowell alleging that he was using the company’s name, menu, and symbol without permission (The Independent Star News, July 26, 1959).

Big Boy was the city’s first drive-in style restaurant, although it’s more accurately a drive-though. The actual “drive-through” concept was new and misunderstood at the time – a full 21 years before McDonald’s opened its first drive-through. In fact, the drive-through concept was so unique at the time that advertisements and news articles had felt a need to explain the ordering process to avoid confusion.

“Customers enter the drive-in along a long drive lined with two-way speakers connected with the kitchen. Orders are taken through the speakers and are ready when the car reaches the food stand.” -Bismarck Tribune, July 6, 1954

At the time of opening, McDowell boasted that the restaurant could serve up to a car per minute, with its 72-inch “high speed” grill and French frying machine that could prepare up to 614 orders an hour.

McDowell also became one of the first franchise holders of Kentucky Fried Chicken, operating both restaurants in a hybrid format for many years. McDowell became close friends with KFC founder “Colonel” Harland David Sanders, who often visited Bismarck. Bismarck’s KFC was only the chain’s fourth location to open nationwide. After KFC became more prominent, and after Sanders sold off the company, KFC took up issue with McDowell owning both franchises, which eventually lead to separating the franchises.

The angle roof line has been extended, the trees tower a bit taller, and the menu’s prices have risen, but little else has changed at Bismarck’s Big Boy in its sixty years. It remains an incredibly popular dining destination, with lines often backing up past the railroad tracks and onto busy Main Avenue during rushes while the restaurant’s two Big Boy statues lay a watching eye. Big Boy is one of the oldest, if not the oldest, continuously operating restaurants in Bismarck.

Big Boy might have been Bismarck’s first drive-in, but others have long prospered in the city. Most, like A&W and Auto-Dine, have come and gone. Another, however, remains just as vibrant as Big Boy… Scotty’s Drive-in, which has thrived in Big Boy’s own neighborhood since 1965.