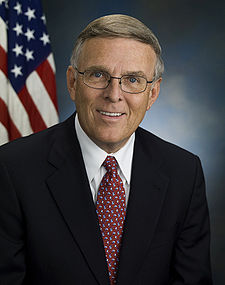 North Dakota’s Junior Senator, Byron Dorgan, announced today that he is not running for re-election when his current term expires in 2010.

Dorgan has been the Chairman of the Senate Committee on Indian Affairs since 2007.

As his expected upcoming re-election grew closer, it had been speculated in recent months that current North Dakota Governor, John Hoeven, who recently started his third term, might make a run against Senator Dorgan. Many had believed Governor Hoeven, a former Democrat-turned-Republican who won his third Governor term in a landslide 74% victory, was the only likely contender who could possibly defeat Senator Dorgan; who himself has had mostly favorable approval ratings since taking office. A Rasmussen Poll in December 2009 had put Hoeven ahead of Dorgan, 58%-38%.

Senator Dorgan’s departure certainly opens the field for a possible victory from either party in the upcoming 2010 election. If I were to guess right now, I’d predict that the 2010 Senatorial Election will be primarily between current House Member Earl Pomeroy and Governor John Hoeven, but that’s just a guess. As of now, neither has announced plans to make a run. Republican Duane Sand has confirmed that he is again trying for a seat on the Senate, despite failed attempts against Senator Conrad in 2000 and Earl Pomeroy in 2008.