Why Does Downtown Bismarck Need Another Parking Ramp? 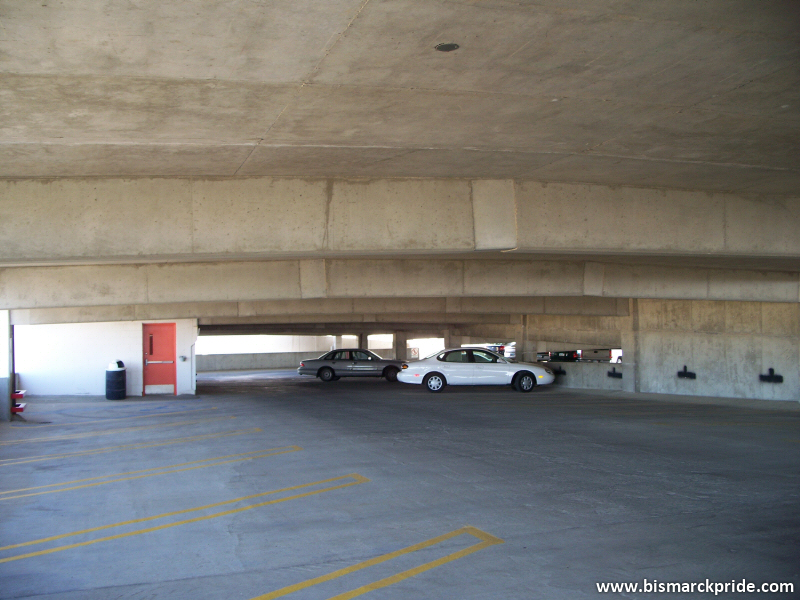 A few weeks ago, the City of Bismarck announced intentions to construct yet another downtown parking garage, next to the City/County Building. The $7 million garage is expected to have a capacity of about 500 cars. My question is simply… why? There are already a total of 6 parking garages located downtown, 3 of which are city-managed. Not to mention, this proposed garage will be located directly across the street from the Parkade.

On the rarity I go inside either of the two “main” garages there are practically no cars parked inside, sitting practically abandoned. I took the picture above in mid-afternoon during the recent Downtowner’s Street Fair – an event that draws thousands of people to downtown each year. The access to the Parkade was readily open on 6th Street, unaffected by the fair, and yet I found only a very small handful of cars inside. Instead, people were parking several blocks away, crossing busy streets and causing a hassle for traffic.

Parking and traffic have been concerns in downtown for decades, causing numerous problems for the historic district. The Pakade was constructed in the mid-1960s to alleviate some of the issues, and a set of confusing one-ways were enacted in 1973, but the issues continued to escalate. The newest downtown garage was built in 1993, and yet parking remains a problem. Building another 500-car capacity garage is not going to solve downtown’s parking issues; it will sit mostly empty, as the others do, while taking up valuable real estate.

Part of why the garages are rarely used is the cost. Granted, the cost for a monthly parking pass is far below the $100+ you’d find in a city like Minneapolis, but a parking pass at the garages is beyond affordability for most who either live or work in downtown Bismarck. Many of the downtown employees only make $8-$9 an hour. Most of the downtown apartments were built long before the automobile was a common way of life, therefore do not have parking lots, and rents tend to be on the lower end for the majority of these units, typically around $400/month.

Here’s my solution: make the parking garages free to park in, even if it’s only for a limited amount of time (say 2 hours). Better yet, give free passes to those who live and work downtown, freeing up street parking for their patrons.

Yes, I do know that it costs hundreds of thousands of dollars each year to maintain the parking garages, and this additional cost would be a big burden on the city. But, on the other hand, downtown Bismarck is notorious for business turnover and building vacancy, often because of the parking issues. We are already taking up large chunks of valuable real estate for parking garages people rarely use. Let’s find a reason for people to use the garages we already have before building another.