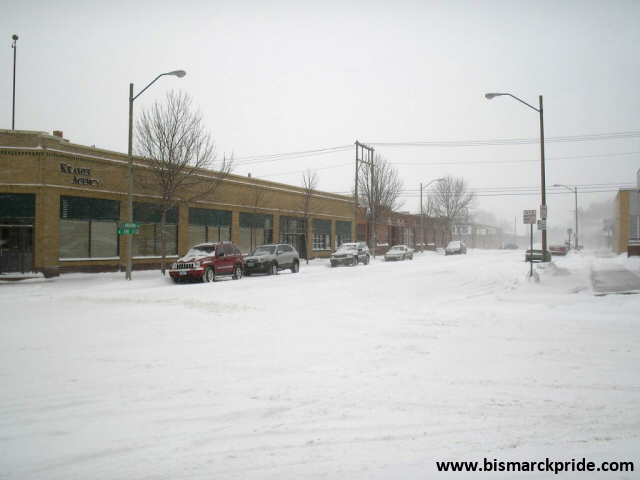 Downtown Bismarck is covered in a blanket of snow after one of the more minor storms of the 2008-2009 Winter Season.

Forecasters are predicting temperatures into the 60s this upcoming Friday, which happens to be exactly one year after the first major snowfall of what would prove to be one of the worst winter seasons on record. To mark the one-year anniversary of last season’s epic beginning, I thought it’d be fun to remind everyone just how tough last winter was. Although we did miss the all-time snow record, set in the 1996-1997 Season, by 1.4 inches, the Winter Season of 2008-2009 was certainly one of the most memorable in Bismarck’s history.

As I’m sure many of you remember, the season started with a bang, when a record-breaking rain storm began the night of November 5, then turned into snow by the next afternoon. When all was said and done, a total of 9.4 inches of wet snow fell on top of the rain-frozen streets and sidewalks. It was the first time Bismarck-Mandan schools were cancelled due to weather since the Blizzard of April 1997.

Anyone who wished for a white Christmas certainly got what they wanted, with 25 of the 31 days in December receiving measurable snow. By mid-month, the record had already been broken for the most snow recorded in December, beating out the old record set 92 years earlier. Before the month ended, December 2008 again went down in history – as the snowiest month ever in recorded history, beating out March 1975 with a total of 33.3 inches.

If you liked it cold, you were also quite happy. The average temperature for December 2008 was only 6.8 degrees – 8.4 degrees below average. On January 15, 2009, Bismarck reached -44oF, the coldest temperature recorded since January 18, 1950. The lowest temperature ever recorded in Bismarck was only one degree colder, and only recorded twice – January 13, 1916 and February 16, 1936. Remarkably, the high temperature the following day was 80 degrees warmer.

Less than a month after nearly hitting the all-time coldest temperature, rain again fell on the region on February 9th and 10th, and as it did in November, slowly turned into snow.

By Mid-March, spring fever began to set in. Most of the record breaking snow had melted, but was now causing widespread flooding across the state. On March 23-24, the season’s third rain-turned-snow storm arrived – a near repeat of the season’s commencing storm.

It was the worst flooding seen in Bismarck since April 1952, a year before the closure of the Garrison Dam. Water released at the dam was completely turned off for the first time ever in its history, but it still wasn’t enough. Ice jams south of Bismarck were causing most of the flooding. Specialists were ultimately brought in to detonate the large chunks of ice, some of which were larger than a car, in order to continue the river’s flow.

Just when everyone thought winter had ended, a rare spread of snow fell across western North Dakota on June 6. Bismarck itself did not see any of the snow, but several inches were seen just to its west.

We may have seen measurable snow earlier this year than we did last year, but if you aren’t a snow lover, this season is certainly getting off much better and not on par to break any snow or low temperature totals.