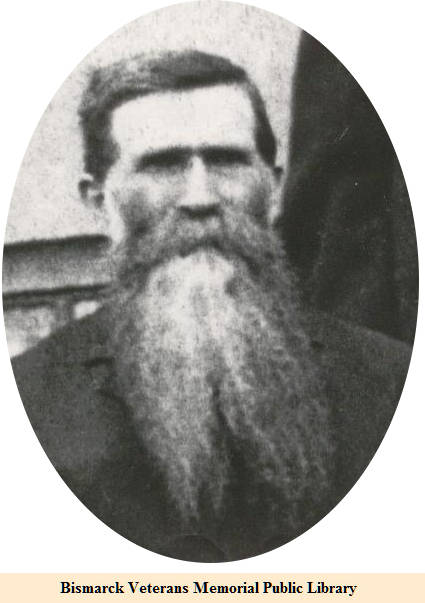 Colonel George Sweet was a lawyer for Puget Sound – the auxiliary townsite company for Northern Pacific Railway, who took possession of land on behalf of the railroad for the townsite that is today Bismarck. Sweet Avenue is named for him.

George W. Sweet was born September 20, 183 in Hartford, CT. He arrived in Minnesota in 1849 as a carpenter. He later studied law and served in the Minnesota State Legislature from 1859-1860.

Sweet arrived in present-day Bismarck on May 13, 1872 with a survey party responsible for locating and securing land on behalf of the railroad, for its line and a townsite. Originally, Sweet’s intended target for a townsite was immediately along the shore of the Missouri River, about three miles south of present-day Bismarck. However, Sweet was forced to retreat to the city’s current location after squatters asserted land claims ahead of him. Members of Sweet’s own party, chiefly John Jackman – employed by competing rail tycoon James Hill, were behind the effort.

Sweet had no legal remedy against squatters, so on May 14th, settled “on an elevated swell of ground about two miles back from the river.” where Edwinton (now Bismarck) is established. Eager to promptly procure unencumbered land, Sweet hired individuals to take personal possession of land at the new site under the condition that they would sell it to the railroad once proper title could be conveyed.

Sweet was also in charge of selling railroad land to private citizens, and assisted J.E. Turner, a Civil Engineer working for Northern Pacific, in platting the town.