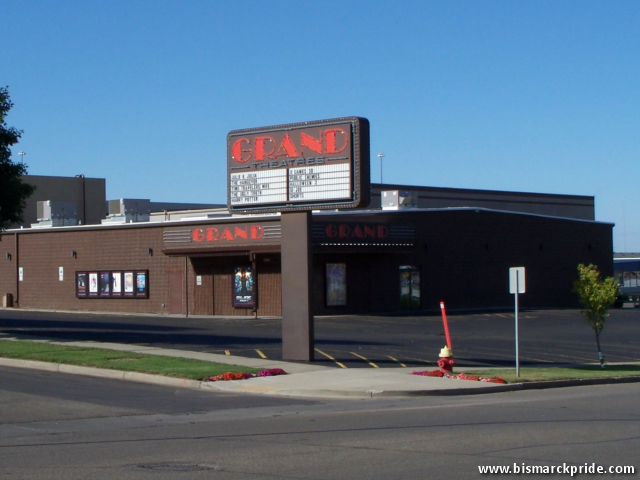 Grand Theater is a 22-screen movie theater at 1486 Interstate Loop. It is Bismarck’s largest of two movie theaters. Since opening, it has been locally owned by Jerry Brekke, who previously owned Mandan’s Showboat and Bismarck’s Capitol Theatre.

Constructed for $500,000, including equipment, Grand opened with only two screens in fall 1984. While the building accommodated three screens , opening of the third was delayed due to financial issues. It boasted a glass front and long lobby, with the main entrance on the northeast side. Several wax models of movie stars served as decor, including Charlton Heston as Moses and Burt Lancaster as a pirate.

The first movies shown were “No Small Affair” and “Night of the Comet.”

Grand has been expanded several times since, the first of which added three screens in 1994 to a total of six.

Grand completed a major remodel and 16,000-square-foot addition in 2001, which doubled its size and increased capacity to 10 screens – surpassing Gateway’s theater to be the largest in Bismarck. Each of the new theaters featured a wall-to-wall curved screen and stadium seating. The main entrance was relocated, opening into a new, larger lobby and adjoining concession area. An Egyptian-theme decor debuts.

The 2001 expansion resulted in the demolition of the building housing second-hand store Hodge Podge, which relocated into the former UBC Thunderbird store located nearby.

One year after its major expansion and remodel, the former lobby was transitioned into an additional theater. Three years later, in 2005, four more screens were added to a new capacity of 15.

It added seven screens in 2012, bringing its capacity to 22. D-Box seating was introduced at this time. In comparison to other recent additions, five of the new theaters were smaller scale, seating only about 75 people. A children’s party room was added, as well as additional parking.

The latest expansion made use of two recently vacated properties… to its south in the area formerly occupied by second-hand store Hodge Podge, and Green Thumb Nursery.