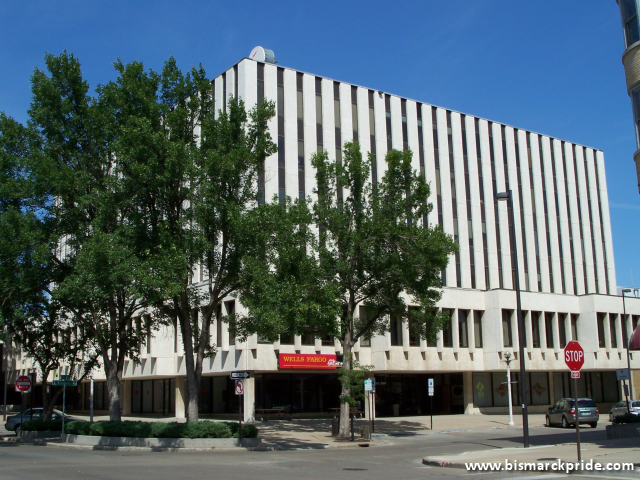 Wells Fargo is the successor to Dakota National Bank

Dakota National Bank & Trust was a long-time local bank and the predecessor to Wells Fargo in Bismarck.

Dakota National was founded in December 1929 when it assumed control of First Guaranty Bank. Numerous local historically significant citizens were original board officers, including John Fleck, Robert Webb, and two members of the Davis family.

For much of early existence, the bank was located at 212 N 4th Street. In 1956, it opened Bismarck’s first drive-in bank at the rear of its 4th Street location. It later opened a second branch at at 5th and Rosser, still a branch of Wells Fargo (the building was replaced in 1979).

In 1974, the bank reorganized as Dakota Northwestern Bank National Association. This same year, it commenced construction of its new headquarters on the site of the former Grand Pacific Hotel. The 6-story building was completed in 1976 and today houses Wells Fargo, the bank’s successor.

From inception, the financial institution was affiliated with the Northwest Bancorporation, which evolved into Norwest Bank in 1983 before merging with Wells Fargo in 1998. It seems that local ownership ceased in about 1988.