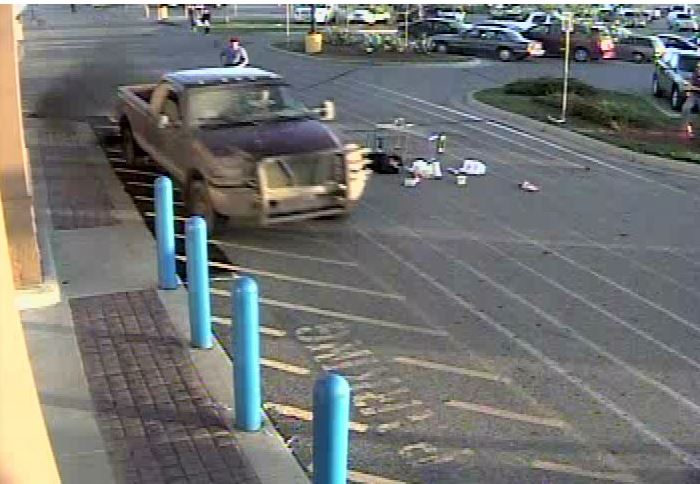 UPDATE (7/11/2014): The suspect in the incident has been located and confessed… read more.

UPDATE (7/3/2014): The suspect in the Tuesday hit and run pedestrian accident has been identified by Bismarck Police, however, are not yet releasing his name, according to KX News. Charges are pending in the case.

The Bismarck Police Department is asking for the public’s help in locating a driver of a vehicle who struck a pedestrian and left the scene.

On Tuesday, July 1st at 9:12 pm a 56 year old Bismarck woman was walking out of the north Bismarck Wal-Mart.  As she was pushing her shopping cart and walking across the crosswalk she was struck by a northbound 2000’s model maroon Ford F250 pickup.  She was struck with the front center of the vehicle, knocking her to the ground.  The vehicle had a Camel cigarette vanity license plate “SMOOTH1.”  This is not a real license plate. The driver is described as a white male, mid 20’s, wearing a black baseball cap, possible facial hair.

Police later located this vehicle in the area of 19th and Century and attempted to stop it, but it fled eastbound on Century Avenue at a high rate of speed and police did not pursue.

The victim was taken to St. Alexius hospital.

Anyone having information about the driver of this vehicle is asked to call the Bismarck Police Department at 223-1212.  To report information anonymously, call Crime Stoppers at 224-TIPS (224-8477.)