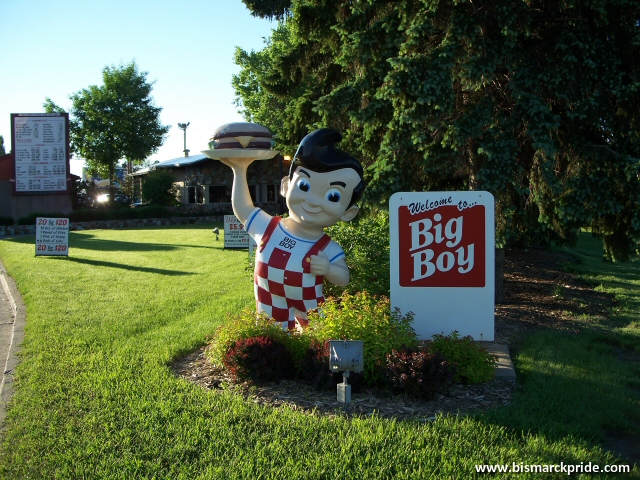 Flying Saucers and Brown Purple Cows… you might think to find such items at Space Aliens Grill & Bar, but you might want to try Bismarck’s Big Boy instead.

After 55 years in business, Big Boy has become somewhat of an icon, or even a landmark for the city of Bismarck. It is one of the things most often associated with the city. Mention ‘Bismarck’ to anyone outside of the region, and the first thing they mention is often ‘Big Boy’.

Bismarck’s Big Boy certainly stands out amongst others in the 400+ location chain. It is the only Big Boy to not have indoor seating, and perhaps the only remaining one to feature drive-through service. Unlike other Big Boys, it does not serve breakfast items, or most other of its menu items for that matter. In fact, the Big Boy Original and Double Decker are about the only menu items carried over from the national chain.

Big Boy is unquestionably most identified with its Pizza Burgers “Flying Style” –derived from its original menu name “Flying Saucers”. The cinnamon-cola flavored soft drink Hot-N-Tots are also widely sought after, and what many may not know is that Big Boy’s Double Decker Hamburger is rumored to have been the influence for McDonald’s Big Mac.

Opened by Harley McDowell in July 1954, Big Boy was Bismarck’s first drive-in restaurant. A traveling salesman, McDowell had seen a Big Boy in a nearby state during a business trip and decided to open one in Bismarck. Other locations soon opened across the state, including a second location in downtown Bismarck. Today, the original location at 26th Street and Main Avenue is the only remaining Big Boy within nearly a thousand miles.

McDowell also became one of the first franchise holders of Kentucky Fried Chicken, operating both restaurants in a hybrid format for many years. After KFC became more prominent, the company took up issue with McDowell for owning both a Big Boy and KFC franchise, and therefore he was forced to drop the KFC franchise. Despite ending his relationship with KFC, Bismarck’s Big Boy continues to sell menu items often associated with KFC, including gravy fries and chicken buckets.

Despite originally being called a “drive-in”, Bismarck’s Big Boy was more accurately a drive-though, same as it is today. “Drive through” was not a common phrase when it opened in 1954 – a full 21 years before McDonald’s opened its first drive-through. Also unusual at the time was the restaurant’s extended hours, closing at Midnight. Even into the 2000s, many of Bismarck’s fast food restaurants closed at 10:00pm.